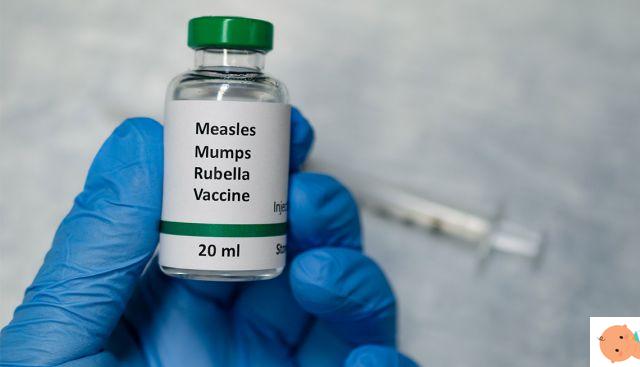 What is measles and the risks of the disease

Measles is a childhood exanthematous disease caused by a spreading virus by air, from person to person. Until a few decades ago there was no vaccine against this disease and in Europe, where it was introduced much later than in the United States, measles harvested a large number of victims (3 to 10 children per 10.000 cases!), although this may seem strange to someone who has had the infection in a benign form.

The most frequent complications of measles


2022 was a terrible year as regards the spread of measles in Europe: over 21 people became ill (5006 in Del Paese alone) and 35 died (4 in Del Paese). And 2022 also has a significant burden of disease: the latest data from the Measles and Rubella Integrated Surveillance System, from January to September 2022, occurred in our country 2295 cases of measles.

When to do / not get the vaccine

Children are vaccinated after the end of the year and ideally young people and adults who are not immune should also be vaccinated. If a non-immune person comes into contact with a sick person, he or she can prevent the development of the disease by getting vaccinated within 72 hours.

Since 2022 measles vaccine is one of them required by law. The vaccination schedule provides for the administration of two doses of the vaccine: one at 13-15 months and one at 6 years.The vaccine is effective in 98-99% of cases and immunity lasts a lifetime. Read also: Compulsory and voluntary vaccinations, the calendar

Eight out of ten children have no side effects from the measles-mumps-rubella vaccine. It is possible that one will show up local reaction with pain, redness and swelling at the injection site. In some cases, even a modest is manifested rash which may resemble that of measles and fever. Sometimes there is an enlarged lymph node and joint pain. All of these symptoms are benign and subside within hours.

La high fever (above 38,5 ° C) occurs in about 10% of the vaccinated. All symptoms usually appear between 5 and 12 days after vaccination and are related to the phase in which the attenuated virus replicates in the body, which occurs mainly after the first dose. With the second, the immune system is much more reactive and viral replication is partially blocked: consequently there are fewer side effects.

Local reactions can be treated with cold compresses and acetaminophen as a pain reliever. In case of fever it is important to give the child a drink, do not cover him too much and give him, also in this case, paracetamol which has an antifebrile action. In any case, the fever should not exceed 48 hours: if it lasts longer it is good to call the pediatrician because it could be another infection (flu or similar).

- serious side effects are rare: in three cases for every 10 thousand vaccinated convulsions related to high fever appear. In two to four cases out of every 100.000 vaccinated, thrombocytopenia can occur, which is an alteration in blood coagulation that can cause bleeding, mostly minor but which must be promptly treated. The anaphylactic shock it appears in one case in every million vaccinated. Contrary to what happens with actual disease, the attenuated virus used in vaccination does not cause encephalitis or meningitis.

THEegg allergy, once considered a contraindication, is no longer so. The American Academy of Pediatrics has carried out studies that have shown that the use of embryonated chicken eggs for the production of vaccines does not make them dangerous for sensitive people. These indications have also been acknowledged by the Ministry of Health which has established the obligation to vaccinate even allergic children without carrying out desensitization procedures.

The hoax of the relationship between vaccines and autism


In 1998, researcher Andrew Wakefield published a study according to which the increase in autism cases was caused by the measles vaccine. Although many scientists had questioned his research from the beginning, the news has been widely echoed and is still being passed off as true on various Internet sites and publications.

In 2022 the science journalist Brian Deer, at the end of an investigation lasting many years, published in the British Medical Journal the proof that the correlation does not exist and that Wakefield's article is the result of a fraud, subsequently admitted by the author himself. Wakefield's bogus article did a lot of damage, prompting numerous families to avoid not only this vaccination, but the practice of prophylaxis in general.

Vaccines and autism, the mother of all buffaloes turns twenty

Read also: vaccines and children, guide from A to Z