Meningitis and children: symptoms, precautions and vaccines for prevention 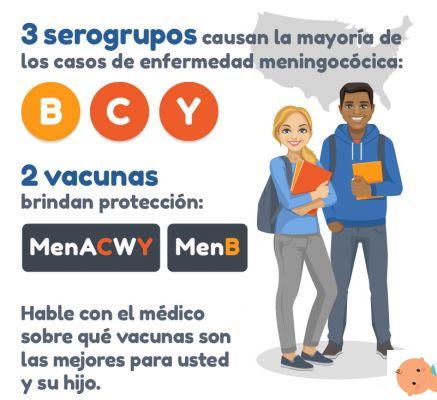 Meningitis is a (rightly) scary disease. Although it is not very common in Del Paese, from time to time serious news cases bring the topic to the fore.

We took stock of the disease, also with the help of the professor Gian Vincenzo Zuccotti, today director of the Department of Pediatrics of the Buzzi Children's Hospital in our city, to better understand what the symptoms are, how to intervene promptly and - very importantly - what prevention strategies are available.

"Meningitis is an inflammation of the meninges, that is, the membranes that surround the brain and spinal cord and which have a protective function "explains Zuccotti." This inflammation affects the brain causing severe neurological symptoms which can lead, albeit rarely, to serious complications such as

The causes of meningitis can be many, however in most cases the disease is of infectious origin and is mainly caused by viruses and bacteria.

La viral meningitis is more common, but luckily even more benign: it usually has no serious consequences and resolves within 7-10 days. The bacterial form, on the other hand, is rarer but extremely more serious.

"Before the 90s of the last century, Haemophilus influenzae type b was the main culprit of bacterial meningitis. However, after the introduction in Del Paese of the vaccination against this bacterium - a vaccination included in the so-called hexavalent - the incidence of this infection has been significantly reduced "says the expert." Today the microorganisms most frequently involved in newborns are Group B streptococcus, Escherichia coli and Listeria monocytogenes, while in the infant and the older child the two main bacteria responsible for meningitis are the meningococcus (Neisseria meningitidis) and lo pneumococcus (Streptococcus pneumoniae)".

How widespread is it in Del Paese?

To get an idea, according to the latest available data from the National Institute of Health (presented in March 2022), in 2022 there were a total of 1531 cases of pneumococcal disease, 228 from meningococcus and 144 from haemophilus.

In our country sporadic cases constitute the vast majority of the reports, even if epidemic outbreaks have been recorded over the years in some regions of the Paesene, with a seasonal trend and a incidence peak in the winter months.

Is it a very contagious infection?

"The bacterial meningitis can actually be contagious (while the viral forms are much less aggressive) "declares Zuccotti.

In particular, bacteria are transmitted from person to person via respiratory secretions, above all

To transmit the pathogenic microorganism can be both sick and healthy carriers of the bacterium, that is, people who, while harboring the microbe, do not develop the disease. In any case, in the presence of bacterial meningitis whoever has most closely attended the patient should undergo antibiotic prophylaxis and surveillance over time.

However, it is important to underline that for the infection to occur it is necessary to have been in close and prolonged contact with the infected person or the carrier.

How to recognize meningitis?

Unfortunately meningitis often manifests itself in a nonspecific way, with symptoms common to other conditions that are much less serious and vary according to age.

In the infant the disease often manifests itself with

As the child ages, the symptoms become more similar to those of the adult and may include

Fever, vomiting and headache are typical of the early stages of meningitis but they are also the same symptoms that characterize the viral infections typical of the winter season. Then appear i more specific symptoms such as

In some cases they can manifest themselves spots on the skin whose number tends to increase in a short time. This occurs when the bacterium has entered the bloodstream: the widespread infection is called sepsis and is particularly dangerous.

Read also: Fever in children: how to behave

What to do if meningitis is suspected?

"In case of the presence of the symptoms listed above - says Zuccotti - one is required timely visit by a pediatrician (or of the doctor if we are talking about adults) and the immediate execution of blood tests, but also of the so-called cerebrospinal fluid examination, a fluid that bathes the brain and spinal cord and can be collected through a lumbar puncture. "

How the CSF exam works

It involves inserting a special needle in the lumbar area, to extract a minimum amount of liquid that can give information both on the type of meningitis and on the germ that caused it: it is a procedure that must necessarily be performed in the emergency room.

First aid, 12 situations in which it is necessary to bring the children

When should children be taken to the emergency room? Here are 24 situations that require an emergency visit. Sources: Indications from Simeup (Società Del Paesena di ...

How is it done?

Treatment of bacterial meningitis is mainly based on the antibiotic therapy. Identifying exactly the responsible bacterium is important both for deciding which antibiotic to use and for establishing whether antibiotic prophylaxis should be carried out on people who may have come into contact with the patient.

In general, the earlier the treatment, the more likely it is to be successful and that the disease heals without success. Unfortunately, it can happen that the disease strikes in fulminating way, leading to serious consequences or death within hours even if adequate therapy has been done.

How to prevent it?

"The best weapon we have available for to prevent some forms of meningitis is vaccination, which is able to confer protection both to the single vaccinated individual and, indirectly, to the whole community, reducing the circulation of the microorganism "declares the expert.

"A high vaccination coverage for the microorganisms responsible for meningitis it is a winner if you really want to prevent the onset of the disease ".

Read also: What is herd immunity?

As for pneumococcus (Streptococcus pneumoniae), today in Del Paese we have two vaccines available:

The vaccine can be administered to from 6 weeks of age: in particular, if the child is less than one year old, three administrations are necessary, which can be carried out together with those of other vaccines.

From 1 to 3 years, two administrations are required, while afterwards it is done only once. In general, no calls are made until old age (the other age most at risk after the 3-5 year range).

For the prevention of meningococcal meningitis, one must first distinguish between type C and type B. Until a few years ago, the protection of children against meningococcus C it was ensured by a monovalent vaccine (specially developed against this serogroup). Later, however, it was approved from the age of two on quadrivalent vaccine against serogroups A, C, Y and W135, already used for teenagers.

In fact, it must be said that meningococcus C has two peaks of incidence: around two-three years and in adolescence. In reality, it is still not entirely clear how long the immunity guaranteed by vaccinations that are carried out in early childhood lasts (and which are important precisely because early childhood is one of the groups most affected by the disease). Scientific literature suggests that, in children, after 5/6 from the first vaccination the immune protection may begin to decrease.

For this reason some regions, such as Tuscany, already offer a recall of vaccination at 11/12 years. The new National Vaccine Prevention Plan 2022-2022 also recommends repeat vaccination in adolescence.

In Del Paese, as in Europe in general, the most widespread forms of meningococcal meningitis are precisely those C and B. The meningococcal B vaccine has been available in our country since the beginning of 2022.

Until recently, the offer for this vaccine, recommended in the first year of life, it was varied: some regions passed it for free, others did not, still others with a sharing of expenses with families. The new vaccination calendar, however, also provides for this vaccination, with three doses to be administered within the first year of life plus a fourth at 13 months of life, interspersed with the other vaccination sessions.

Zuccotti clarifies forcefully: "Yes, they are safe. With vaccines the bacterium is not inoculated, but polysaccharides of the bacteria, which are sugars sufficient only to arouse the immune response, certainly not to trigger the disease. They are also vaccines. well tolerated and free from significant side effects (except those common to other vaccinations, such as fever or pain at the injection site) ".

Other sources for this article: Web page of the Bambin Gesù Children's Hospital in the city; Information material from the Epicentro institutional website, book Free from meningitis.

add a comment of Meningitis and children: symptoms, precautions and vaccines for prevention