Milk for babies after 12 months 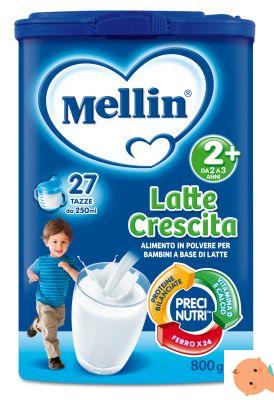 The best milk even after 12 months remains the mother's milk

Breast milk is the best food that can be offered to babies. The most complete. It is rich in calcium and proteins useful for building and strengthening bones. It is an important source of essential fatty acids, essential for brain and cognitive growth. And it contains important factors including immunoglobulins and prebiotics, which help the growing organism protect itself from bacteria, viruses and other disease-causing agents, and active ingredients that promote the development of the digestive system. Because of this the World Health Organization (WHO), as the Del Paesena Society of Pediatric Nutrition reminds us, it recommends exclusive breastfeeding for at least the first 6 months and then as long as possible, even up to two years, according to the wishes of mother and child.


even the Technical Table on Breastfeeding of the Ministry of Health promotes breastfeeding even beyond the first year of life for the benefits it brings to the cognitive, emotional and relational development of the child, to his health (in terms of obesity prevention) and to that of the mother (because the more she breastfeeds, the lower the risk of breast cancer).

But if you are not breastfeeding, which milk to choose after 12 months? The visions are not unanimous

If everyone agrees on the value of breast milk, however, there is no unanimity of thought, even among professionals, on which milk is the most suitable to replace mother's milk (or the formula in the case of infants not breastfed) after 12 months, if the mother is no longer breastfeeding. In the second year of life, the little ones of the house are already weaned and, more or less, take part in meals with the rest of the family: there are those who eat only baby food prepared specifically for them, and those who taste a little of everything that is at the table. In any case, milk is no longer the absolute protagonist of their diet.


And if some pediatricians and nutritionists give the green light to cow's milk, the dairy milk that mum and dad also consume, for others it is better to resort to the so-called growth milk, a product designed specifically for children from one to three years old.

It is of this opinion, for example, Marcello Giovannini, president of the Del Paesena Society of Pediatric Nutrition. “It is important to remember - he emphasizes - that the child is not a 'small adult' and therefore milk must also be suitable for children. Cow's milk, which has a higher protein content than breast milk, is the least suitable for newborns and infants and should not be given before 12 months. But an even more prudent attitude suggests postponing its introduction after 24 months, also because it is low in iron, an essential nutrient for brain development and psychophysical growth ".

Compared to breast milk, cow's milk contains three times as many proteins while the iron it supplies is less bioavailable: that is, less absorbable by the body. “Growth milk, on the other hand, is essentially less fat, contains less protein (the protein content is close to that of breast milk) and is enriched with some micronutrients, such as iron and zinc. Therefore, it could help in the management of children from a nutritional point of view and help reduce the risk of overweight and obesity "he says. Gian Vincenzo Zuccotti, scientific director of the Nutritional Research Center of the University of our city and the pediatric clinic of the Buzzi Children's Hospital. Although this does not mean that a baby who takes cow's milk will certainly be obese, because milk is only one of the foods, and not the main one, of his diet.


Zuccotti, therefore, does not ban cow's milk from the children's table, but he is more inclined to delay its introduction in favor of growth milk, which he compares to a full optional machine “because it is enriched with components (such as polyunsaturated fatty acids, oligosaccharides, lactoferrin) that are functional to the development of the child”.

Second Claudio Maffeis, director of the Diabetes Unit, Clinical Nutrition and Obesity of the University of Verona "when the year is over, children can take cow's milk, but you have to be careful of excess protein intake". In other words, according to the professor of pediatrics at the University of Verona, it is necessary to keep an eye on the total amount of protein consumed during the day, through milk and other foods, such as cereals, meat, fish, eggs, cheese.

“By adding these intakes, the limits recommended by the Larns (Recommended Nutrient Intake Levels) must not be exceeded, which from 12 to 24 months go from 1,2 to 1 gram per kilo of body weight per day. By consuming cow's milk, which contains around 3,4g of protein per 100ml, it is easier to overcome them. In fact, a 300 ml bottle of milk alone satisfies the daily protein need of a child weighing 9 kilos. With growth milk, the risk of administering excess protein, a risk factor for the development of excess weight, is lower ”.

"In practice - continues Maffeis - to satisfy the nutritional needs of children and at the same time avoid excesses, both growth and cow's milk can be used, a choice that however requires parents to control even more carefully the supply of nutrients in the five daily meals (breakfast, snack, lunch, snack and dinner) ".

In short, growth milk is a possible choice, but not essential, if thanks to a balanced diet it is possible to guarantee the right amount of nutrients.

And this is precisely what the Federal Institute for Risk Assessment (BfR) relies on in considering growth milk superfluous. According to the German body that deals with food safety, in fact, in the context of a balanced diet, special milk for infants is not necessary to meet the nutritional needs of children. Indeed, "these products, enriched in vitamins and minerals, could lead to an excessive intake of some micronutrients (iron and zinc, for example), to the detriment of others present in lower quantities than cow's milk ". Basically, the Bfr recommends the consumption of cow's milk, but skimmed, which contains less fat than whole milk.

The Cultural Association of Pediatricians (Acp) is also of the same opinion, reiterating: the use of growth milks cannot and must not be the tool offered in view of a more balanced nutrition. "On the contrary - adds the pediatrician Sergio Conti Nibali, head of the Acp nutrition group - the high sugar content and the resulting sweet taste they could influence the child's preferences for sweet foods and promote overweight and obesity ". In short, among the added sugars (sucrose, glucose, fructose or maltose), complex carbohydrates and aromas, we end up nullifying the alleged benefit of a less protein milk.

"So if the mother is not breastfeeding, after the year the baby can safely take fresh whole cow's milk" because compared to the adult it needs more fat per kilo of body weight. "After all - continues Conti Nibali - even the European Food Safety Agency (Efsa) has reiterated that the use of so-called growth milks does not bring any added value compared to a balanced diet". In fact, as stated in a note, "EFSA's scientific experts have not been able to identify" any unique role "of baby foods (commonly referred to as" growth milks ") in the diet of children from one to three years old, concluding that they are no more effective than other foods in providing nutrients ".

They also highlighted that EU children of this age group have a high intake of protein, salt and potassium, but a low intake of dietary fiber: however, such as not to cause concern. Instead, they take in all the other micronutrients useful for the well-being of the body, with the exception of iron and iodine, but real deficiencies are found only in some Eastern European countries.

Breakfast, that's what children around the world eat

If for us Del Paeseni the day begins by eating almost exclusively sweet foods, in Japan it is instead normal to eat fish. In Brazil, breakfast is based on ...

So which milk to buy? It is not a problem

So what to do? If the mother has stopped breastfeeding, what to take home from the supermarket shelves? To settle the question, think about it Riccardo Davanzo, neonatologist at the pediatric hospital of Trieste and president of the ministerial technical table for the promotion of breastfeeding.

“After the year, the choice of milk is not a problem. While scientific research has now amply demonstrated that breast milk is a concentrate of nutritional factors and that it is good to promote breastfeeding at least up to the 12th month, because it reduces the risk of obesity, the risk of cot death and the development of allergies and other diseases, there are not as many studies to support that cow's milk or growth milk is better afterwards ”.

Growth milk meets respectable nutritional criteria and has good palability, but it's not a must. On the other hand, cow's milk is fatter and richer in protein, but in the second year of life, the baby drinks much less milk. “So let's not create a doctrinal castle on the choice between one milk and another. Personally, I have never prescribed growth milk, but if parents opt for this choice, I am not saying that it is bad. Just as you do not have to bandage your head if your children refuse milk: there is nothing in milk that cannot also be found in other foods ".

This is why, according to Davanzo, while more fronts are spent to promote breastfeeding, because the benefits that derive from it for mother and child are well documented by scientific data, no Ministry of Health, neither in the country nor abroad, is breaks down to judge growth milks.

And Zuccotti and Maffeis also agree on this: "the only milk needed is mother's milk, an essential food that must be encouraged for as long as possible".

Food and recipes for good sleep

Here are some foods that promote sleep. Perfect to offer to children for dinner.

Don't know what to cook for the baby? On the mymodernparents.com webtv you will find many recipe ideas

Here, for example, is how to make milk sandwiches for breakfast or a snack

add a comment of Milk for babies after 12 months