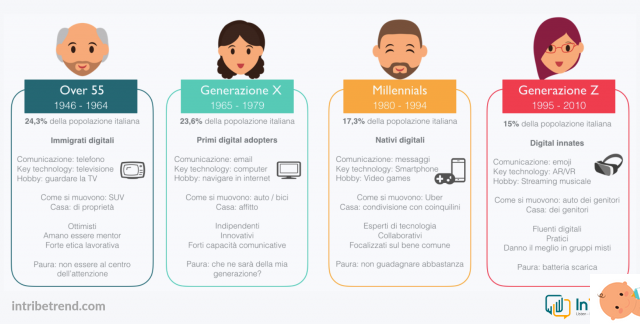 Millenials, X or Z: which generation are we part of? And are our children Z or alpha? Let's make a brief distinction: with the terms Generation Y, Millennial o Next Generation indicates the generation that followed Generation X (those born between 1960 and 1980, the "baby boomers", which instead indicates people born between 1945 and 1959). Those who are part of it - called Millennials or Echo Boomers - were born in the eighties and nineties of the twentieth century. Beyond the identification letters and general characteristics, let's try to understand what it is useful to know and understand about these generations thanks to the indications of Matteo Lancini, psychologist, psychotherapist and lecturer at the Department of Psychology of the University of our city Bicocca, president of the Minotauro Foundation and author of several books including "We need authoritative parents" (Mondadori).

To have a point of reference, we remind you that they are also called "children of the Cold War". The denomination "X"Was invented by the writer Douglas Coupland (author of" Generation X: Tales for an Accelerated Culture. "They have experienced epochal historical events such as the fall of the Berlin Wall, they come after the Boomers (including Bill Clinton, Donald Trump and George W. Bush) and remain "squeezed" between the American dream and the nightmare of the Twin Towers. Among their myths are sushi and manga. "This generation is the closest in time to an educational model by now overcome, which sees work as a sacrifice, relationships as a path to be built even with difficulty to achieve a common goal, but already distances itself from it ".

Also Read: 20 Tips For Parents To Use The Web Safely

Ideal continuation of Generation X, parallel to the Boomerang Generation of which they represent the most cynical and disenchanted part, those born in Generation Y they grew up with pop myths like Paris Hilton and Robbie Williams. It is a generation characterized by greater use and greater familiarity with communication, media and digital technologies. "THE in their thirties today - adds Professor Lancini - they are the first to have entered a completely different world of work, devoid of a sacrificial ethic, but capable of reserving surprises from the point of view of creativity and flexibility; moreover, they have a different way of loving, no longer dominated by the model of a romantic love, in which the couple prevails, but instead built around the self, in some cases with narcissistic traits ”.

La Generation Z o Centennials (also known as iGen or Post-Millennials) identifies the people born after the Millennials. An important element of this group is its widespread use of the Internet since its inception, which also translates into a fruition of "online" culture, through platforms such as Youtube, Netflix and Spotify. Four distinctive traits of the "Zetas" emerge from a study conducted by McKinsey, which can be summarized as the "search for authenticity" (millennials are the "me generation", Zs the "true generation"). The Zetas would avoid labels and would prefer the authentic expression of their thoughts, would mobilize for the causes they truly believe in, would be convinced that dialogue can resolve conflicts and improve the world, and would make decisions in an analytical and pragmatic way. Educationally, Generation Z has been exposed to an amount of technology unthinkable to their predecessors, and is more likely to share personal information online. "The positive aspect visible in these children derives from having grown up with a more expressive educational model, with more present and affectionate parents: a fact that makes them more competent and confident in interpersonal relationships".

Read also: Checking the cell phone of the children: the word to the lawyer

The "little alphas" are the first generation to perceive technology not only as a medium but as an integral aspect of existence. Growing up with the tablet and the mobile phone next to them, they are the children of parents who invest a lot of time, resources and affection in their education: "This last aspect represents an undoubted advantage, but we must also keep in mind the possible other side of the coin, which could arise. in adolescence. Children who have always seen social networks as part of their lives could develop an exasperated need for "like" and approval ", concludes Matteo Lancini.

Also read: What to do when teens retire to their room TAG:
Threats of abortion: the testimonies of mothers with a happy ending ❯

add a comment of Millenials, Z, X and Alpha: generations of parents and children compared