Mom, I have a stomach ache 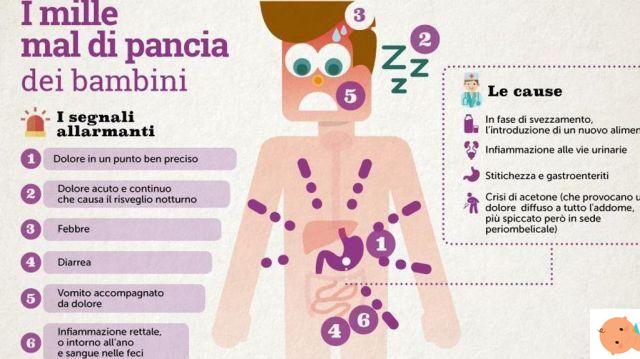 Almost every evening at half past seven Luca, four years old, comes up with the same sentence: "Mom, my stomach hurts." And I, anxious mom, begin to ask myself: Could it be the stomach? Did he hurt something he ate? Couldn't it be appendicitis? Dunno ... In the second week I take Luca to the pediatrician. He visits him and finds nothing strange. "But no, it's nothing, look at that healthy boy!". The same evening, however, the stomach ache returns on time. And so begins the search for remedies: a warm chamomile, massages, a hot water bottle. Sometimes one thing works, sometimes the other, sometimes pampering is enough.

But why is it so complicated? "Young children cannot say precisely what hurts - says pediatrician Christoph Johannsen -. For young children, the belly is the center where everything is projected". Earache is also sometimes perceived as a stomach ache. The little ones really have a stomach ache, but the cause may be elsewhere. And he adds: "Even at six or seven, children often don't know where it hurts." His advice? "If the stomach ache lasts more than a day, it is better to go to the pediatrician, who will determine if there is a real cause."


But stomach ache can also be "from stress" or "from fears". "Stress and fears must also be digested - says the psychologist specialized in childhood pains Sonja Marbach -. It is important to take children's pain seriously. At the same time, however, they should not amplify the problem, continuing to ask: still bad? Is it a little better? "

A strategy that works: get the child to think about something else. How? "Come and read a book, let's go outside, let's build a tower - suggests the psychologist -. The brain can't do many things together and so it lets itself be deceived"

If the stomach ache is "psychological" it is obvious that painkillers are not needed. "We hear more and more often that parents give more and more easily a suppository or a pill", says the psychologist. And she concludes: "It is important for children to learn that they can overcome pain even on their own". The psychologist recommends inventing a game (see box): "Often it has more effect than the suppository, because it is a life lesson: I can do something to help myself."

Do you want to compare yourself with other mothers in your same situation? Go to the health and disease forum

add a comment of Mom, I have a stomach ache