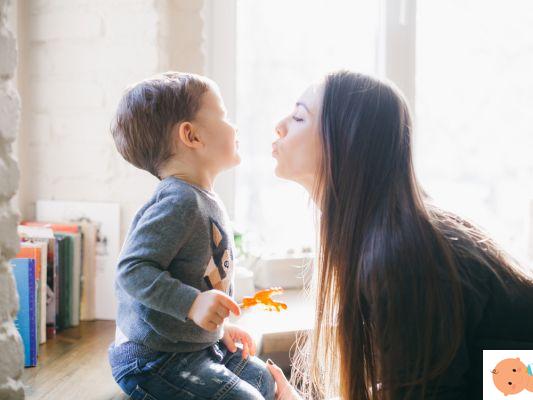 Raising sons is not easy today. In the world of work and couples, the old sexist models are gone and women are more prepared and competitive than ever. But a son raised in a family environment that does not take into account this change in society can end up feeling displaced, confused and even inadequate.

This is why mothers of sons must prepare their little ones to be autonomous, independent, to learn from girls and not to have sexist prejudices. We asked the psychologist Anna Oliviero Ferraris some advice. (Read also: How to raise sons from 0 to 16 years)

1 Involve him in activities considered feminine

Teach him to set the table and clear the table, bake a cake together ... Get him used to traditionally feminine activities. "Your son will be happy to do something with his mother," says Ferraris. "Moreover learning to do housework will help him when he grows up".

2 Give him the value of being a woman

The false belief that being "female" is a sign of weakness is still very much ingrained. Teach him that this is not the case, that being a woman is beautiful, and that in all men there is a feminine side and that this is a positive characteristic, which must be listened to and cultivated.

"The symbiosis between mother and child is very important when the little one is newborn. But after the year of life we ​​have to get him used to autonomy" says the expert. Eg, better to avoid sleeping together in the bed: if we let him sleep with us, we prolong the umbilical cord and create a problem of unresolved intimacy and a bodily addiction that will carry with him forever. Read also: 10 practical ways to educate children about autonomy

4 Have him play with the girls

The beginning of kindergarten is an opportunity to encourage friendship even with girls. The games with girls will be different from those he usually plays with other boys, he will learn new things and explore worlds that were unknown to him.

Let the children free to choose even games considered to be female. "Disguises, dolls, saucepans ... these are all games that intrigue even the males. Leave them then free to play the games they want, even those typically female, if they so wish. There is no reason to fear for their sexuality, "says Ferraris.

6 Avoid video games and cartoons that are too violent

Males in themselves are more physical and handful than females, it is up to you (and the father) to ensure that this physicality does not turn into violence. "You have to try to limit video games and movies or cartoons that glorify male violence, like superheroes, soldiers, robots ... and when you let them see them comment that you disagree with this model ".

7 Have him play a team sport

To vent his physicality, let him do a lot of sport, especially as a team: football, volleyball, rugby ... so in addition to learning how to respect the rules, will learn to manage the relationship with teammates. Read also: Sports for children, how to choose the most suitable activity for your child

8 Let me spend some time alone with the father

"The role of the father is very important because the little one towards the age of 8-9 she begins to identify with him ". Try to favor some good times with his dad: a trip, a pizza just the two of them. Having a role model will help him feel more confident.

9 When he is little, don't worry if he seems to lag behind his peers

Don't be too overprotective with your baby because you see him as clumsy or less self-confident than girls. They are normal evolutionary stages. Females develop language and coordination first but then the boys catch up with them and catch up.

10 Teach him to express his feelings in words

It is often thought that the male does not need to express his feelings. It is normal for him to keep everything inside. It is not so. Children must be taught to speak, asto put their anger or their joy into words.

11 Educate him for independence

"A child who is too dependent on his mother, as an adult, will look for the same relationship of dependence in his partner, which could prove difficult to manage in the event of a separation". Get used to small separations since childhood: send him camping with the boy scouts, enroll him on a summer campus, let him spend a few days at a friend's house ...

The good example of a healthy and equal relationship starts with you. Show him you are women who make themselves respected by men and he will surely learn to respect women in turn. Read also: Violence against women explained to boys and girls

13 Your life as a couple is with your husband

Your child is the greatest love, there is no doubt. But your man is not him but the father. Keep some space for life as a couple: go out to dinner, go to the movies, show your child how important the relationship between husband and wife is.

14 Help him to overcome the first love disappointments

Males often struggle to accept being left by their loved one. Talk to him, stay close to him, tell your disappointments of love, explain to him that the pain of loss passes over time, and it is normal, it is something that happens to everyone. Avoid talking bad about the girl in question. Your job is to make your child feel understood and not to make judgments about people. Read also: Teenagers between sex and love, advice to parents

When he is older, try to understand his need for independence. And when he announces that he is ready to leave home, prove yourself up to it and don't say things that make him feel guilty. Loving a child also means knowing how to let them go when the time comes. Also read: Dad of Daughters, 15 Things You Really Should Know

Watch the video: "The role of the father for sons"

How to raise a self-confident male child?

First of all, get him used to traditionally feminine activities. Learning to do housework will help him when he grows up.

Is it right to show male children video games and cartoons that are too violent?

You must try to limit video games and movies or cartoons that glorify male violence, and when you let them see you comment that you disagree with this model.

TAG:
Mothers on the Move, the "sports" program of preparation for childbirth ❯

add a comment of Moms with sons, 15 tips for raising confident men and good husbands