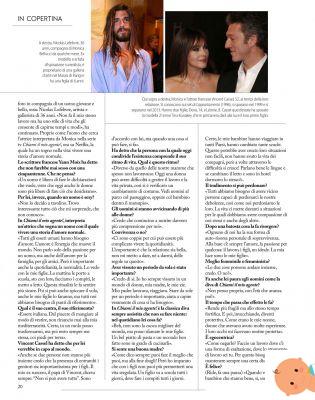 Leonie was born on Saturday, the second daughter of Monica Bellucci and French actor Vincent Cassel. “She is brunette and pretty”, the mother told Vanity People, “it was a natural birth, like those of the old peasant women, the labor lasted two hours and 30 minutes. Leonie lost 3 220 pounds and is 53 cm long ".

Monica Bellucci, 45 (but her mother's date of birth is not as certain as that of the child), has been married to Cassel since 1999 and is already the mother of Deva, 5 years old.

The Umbrian actress, who a few months ago was portrayed with a huge baby bump on the cover of Vanity Fair, had declared that "having children late requires courage" and, commenting on the expectations about the baby on the way, he joked that "you know, the second-born are often a photocopy of their father. from his dad Vincent, he is a stunning man as a man, but can you imagine her as a beautiful little doll with her features? ".


French dad and French name for Leonie, which, more or less correspondent of the Paeseno Leonia but is much more widespread beyond the Alps that in our country, as well as for the decidedly sweeter sound of the French-speaking version, also because it is the name of a famous character in Proust's Recherche.

From the Greek leon (lion) it could also be the translation from Hebrew Yehuda (ie "Judah", the son of Jacob, whose symbol is the lion according to Genesis 49,9).

The name day is mainly celebrated on November 10 in memory of the medieval Pope, then Saint, Leo the Great.

Lots of baby name ideas in the MyModernParents.com dictionary!

TAG:
Cardiotocographic monitoring: what it is, what it is used for and how it works ❯

add a comment of Monica Bellucci gives birth to Leonie