Mononucleosis and children: 5 curiosities to know 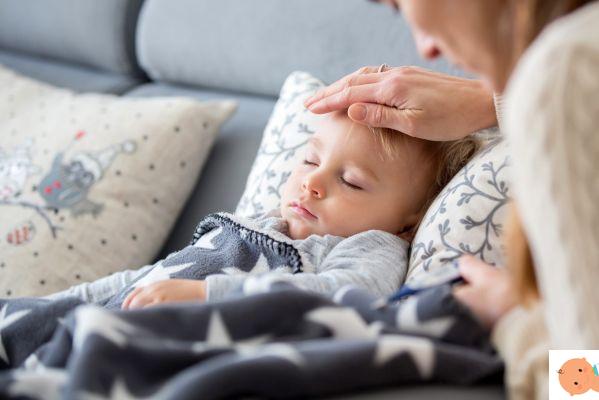 It is one of the most frequent infectious diseases in children and adolescents: in the little ones it is often asymptomatic and goes unnoticed, while in the older the disorders are more relevant. We are talking about mononucleosis, an infection caused by a virus of the herpetic virus family (Epstein Barr, or HBV) whose spread occurs through the droplets of saliva emitted by speaking. Indeed, the kissing disease is called, even if this affectionate gesture is certainly not the first responsible for it and it is more frequent that the infection occurs by drinking from the same glass or from the same can.

Mononucleosis: photos and pictures of the "kissing disease"

Also known as "kissing disease", mononucleosis is a viral infection caused by a virus that belongs to the Herpesviridae family, ...

"After 15-45 days of incubation, the first sign of the disease is a general malaise similar to that of a flu," explains the doctor. Vania Giacomet, head of the simple pediatric infectious disease unit of the Sacco hospital in our city.

"In short, the tonsils swell and become covered with whitish plaques that make swallowing difficult, a fever that can exceed 38 ° appears and an enlarged cervical lymph nodes that become painful. Sometimes, the same increase in volume also involves the lymph nodes groin and armpits. But it is above all fatigue, the most important and debilitating symptom ".

2. It is usually a benign infection that passes within ten days

"Mononucleosis is usually a benign infection that resolves itself in about ten days, thanks to the immune system, and rarely the infection can cause complications. In fact, the swelling of the lymph nodes is precisely the indicator that the body reacts to aggression of the virus: inside them there are B lymphocytes, white blood cells which, alarmed by the arrival of the foreign agent, multiply to stop its advance. At the same time, the immune system begins to produce antibodies, substances specific defenses to annihilate the virus which, once the disease is over, remain as a memory, giving permanent immunity ".

3. The cure? Rest and fluids

"Rest is the first medicine and the necessary drugs are reduced to a minimum: paracetamol-based antipyretics to lower fever and antiseptic mouthwashes to reduce sore throat," explains Dr. Giacomet.

"It is important, however, to make the little patient drink by offering him beverages (such as water, tea, juices): to counteract fever-induced dehydration. If swallowing is difficult, fresh, soft-textured foods are permitted. "

4. Pay attention to the spleen during convalescence

"QSome extra care even during convalescence: mononucleosis induces an enlargement of the spleen which, especially among adolescents, can be important. The organ is therefore less protected and therefore it is advisable to avoid playing sports that involve physical contrast (soccer, for example) for at least one month after healing: any trauma can cause it to rupture ".

Diagnosis of mononucleosis can be clinical, i.e. based on symptoms. For a differential diagnosis, the doctor can use some tests that clarify and allow him to distinguish it from bacterial tonsillitis, an infection that must be treated with antibiotics, which are useless for a viral disease; for example, resorting to the execution of the oropharyngeal swab, or the taking of a small sample of the exudate of the tonsils which identifies whether the agent in question is a bacterium (streptococcus).

Specific tests for the diagnosis of mononucleosis are instead the monotest which detects if there are heterophilic antibodies and, in the event of its negativity, it is useful to search the blood for antibodies to EBV: IgM, an index of recent infection which confirm that the infection is in progress and IgG, an index of infection which remain throughout life.

Skin rashes: a visual guide to recognize them (PHOTO)

A gallery to try to recognize, thanks to a photo, the various more or less known rashes, which can cause ugly rashes in children and adults.

add a comment of Mononucleosis and children: 5 curiosities to know