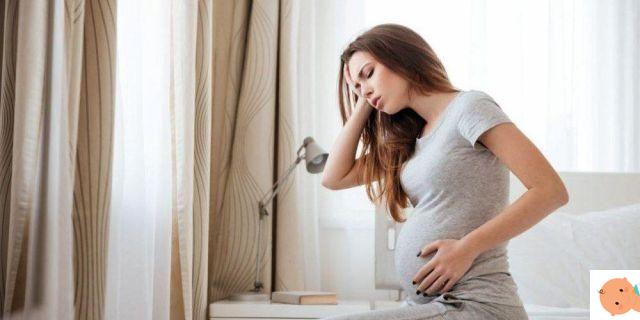 The scientific name is infectious mononucleosis. Often, more commonly, it is known as "kissing disease" because that is how it can be transmitted. In the "package" of viral (and therefore communicable) diseases it is one of the least dangerous and the even better news is that mononucleosis in pregnancy is harmless, unlike other diseases. Let's find out better.

Mononucleosis is an infectious disease caused by a virus called Epstein-Barr, belonging to the class of Herpes viruses, those responsible for example of chicken pox, cold sores or genital and Fire of Sant '. Mononucleosis is transmitted through saliva and is very common especially among children and adolescents.

Despite the definition of "kissing disease", kissing is not necessary to contract it. Coughing and sneezing are enough, or simply exchanging cutlery or toys. This is why for example children who go to kindergarten can easily contract it by sharing games and taking them to the mouth, which happens frequently.

Of course, mononucleosis can also affect adults. Very often, however, it does not give symptoms and therefore it turns out to have had it practically by chance. Other times it is confused with some other ailment, due to non-specific symptoms.

Incubation (i.e. the period between contact with the virus and any symptoms) is quite long, especially in adults: 30-50 days.

When there are, the most common symptoms of mononucleosis are:

In some cases there may be a rash on the skin and the spleen may be enlarged, even with alteration of blood values, for example of transaminases. Symptoms typically last a couple of weeks, but some (such as fatigue) can last much longer.


How is mononucleosis diagnosed

First of all, an objective examination by the attending physician is required who, on the basis of the symptoms, will exclude any other pathologies. To confirm, a blood sample may be ordered both to evaluate the increase in white blood cells (indicate the current infection) and to find antibodies to the Epstein-Barr virus in the blood.

Mononucleosis recovery can take a while. The therapy consists of rest especially in the period (about 2 weeks) in which the symptoms are felt more severe. The doctor will prescribe antipyretics to lower the temperature and / or anti-inflammatories, especially to counteract the headache. Cortisone-based drugs are indicated in certain circumstances always evaluated by the doctor.

As with viruses in general, antibiotics are completely useless.

Compared to other pathologies of viral origin, mononucleosis in pregnancy should not scare. There are no particular dangers for the health of the mother and not even for that of the fetus. On the other hand, when contracted with the belly, rubella - just to give an example - can cause serious problems, such as severe fetal malformations.

The only drawback of mononucleosis in pregnancy is that it can weaken the immune system, which already normally happens when gestation begins. The expectant mother could therefore be more prone to diseases and infections. It is advisable to try to protect yourself, for example by avoiding contact with people who are not well.

The cytomegalovirus mononucleosis deserves a separate discussion: this could constitute a danger for those expecting a child.

Cytomegalovirus is a virus that does not give important symptoms, but in pregnancy it can be risky for the fetus, sometimes with serious complications. It belongs to the same family of Epstein-Barr, the Herpes viruses. Symptoms on the baby can occur at birth, but also after some time. They can be temporary or permanent.


Among the former are jaundice, seizures, red patches on the skin (such as small bleeding), low birth weight, lung, liver or spleen problems. Permanent symptoms, real disabilities, are much more serious: mental retardation, microcephaly (reduced brain size), blindness, deafness, movement coordination problems, convulsions. This is why catching the virus during gestation can be very dangerous.

In some cases the infection appears as a particular form of mononucleosis, called cytomegalovirus, characterized by acute fever. This type of mononucleosis can also cause hepatitis, with an increase in transaminases, and an increase in lymphocytes. It is therefore important to try to implement all the main cytomegalovirus prevention rules, for example washing your hands often and not being in contact with people who have flu symptoms.

add a comment of Mononucleosis in pregnancy: symptoms, causes, treatment