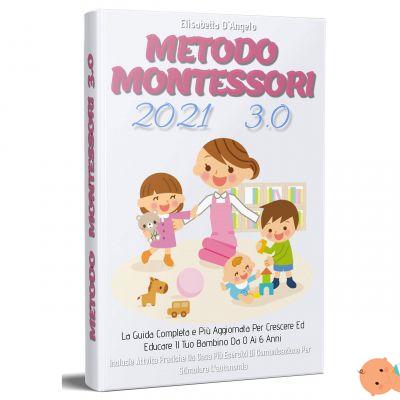 The Montessori Method is an educational system based on self-directed activity, hands-on learning and collaborative play. In the Montessori classrooms, children do creative choices while the classroom / environment and the highly qualified teacher offer age-appropriate activities to guide the self-learning process. L'obiettivo it is to make them autonomous, independent and allows them to discover and explore knowledge of the world, developing their own massimo potential.

Maria Montessori has always placed at the center of her research studies and her work defense of the child, your needs and your rights.
In 1907 he founded the first of the city 'Children House', a field of testing and fine-tuning of his method, in a' child-friendly 'environment, with furnishings and spaces at his height.
Since then, in the following centuries, the Montessori method has become an integral part of the pedagogical system of the XNUMXst century and it has spread all over the world where many children's homes have been born.

Maria Montessori is born Clairvaux August 31, 1870 in an educated family To follow the father, the family moves first to the city and then to the city, which has become the capital of the country. Maria enrolled in the faculty of Medicine of the La Sapienza University, not without difficulty. In 1896 she was one of the first women in Del Paese to graduate in Medicine to further study Neuropsychiatry infantile with difficult children and considered, at the time, abnormal.


The first results of his research, presented in 1898, show that, thanks to his method, the children were able to pass the normal school public exam. Finished the work with i problem children, Montessori's interest passes to all the others. According to her thought, the school educates the child in an incorrect way, only superficially stimulating her intellectual abilities.

His Children's Homes began to spread throughout the country and the popularity of the Montessori Method only suffered a setback during Fascism.

She died over eighty in the Netherlands in 1952, after being nominated three times for the Nobel Prize (without ever winning it).

Maria Montessori: the most beautiful phrases
Many of us already know several phrases dedicated to children without knowing that they are the result of the ingenuity and passion of Maria Montessori.
Here is a selection:

How to educate children at the respect for the rules following the Montessori method? The Montessori educator Catherine Dumonteil-Kremer in his book "Stop. Putting limits on your children through listening and respect" (Terra Nuova Edizioni), he explains:

Our son is not a puppet made to go straight to the people he loves most in the world: his parents. If we respect him, he will not blindly obey orders, but he will be happy to cooperate with us

The educator advises to dominate anger, give clear rules and use some simple tricks to melt the pout and bad mood.

20 Montessori activities to do at home, ideas and ideas

Many craft ideas, colorful and easy to make within the four walls of the house with everyday objects, to free the creativity naturally inherent in every child.

The Montessori method can also be applied in daily life and in the education of children.
Daniela Valente, author of "How to Unleash Your Child's Potential - Practical Handbook of Montessori-Inspired Activities for the First Two and a Half Years" and founder of the Montessori4you website, explained in a previous interview with mymodernparents.com that

Treating the child with respect does not mean not maintaining one's role as an educator, but it does mean considering the other person as an independent person, not our property. According to Maria Montessori, every child has come into the world with a special task to carry out and our task is to help him find his way by accentuating the positive side of things. For this, it is important that you use affirmative language forms, praising his actions and positive attitudes, while at the same time correcting the negative ones.

Be Montessori parents therefore, it means respecting the child, helping him to do it himself, putting him in a position to self-learning and self-correcting and to manage according to these principles both the moments of the game, the educational ones and the sleep of the little ones.

What are the main characteristics and objectives of Montessori activities?

First of all, they always have specific objectives, such as the refinement of five senses and development of the child's autonomy. In addition, each activity includes a intrinsic error control: the child can learn by himself, without the need to be followed by an adult, because the activity already provides for the possibility of self-correcting. Finally they are gradual: they offer only one quality and type of materials and game at a time and are increasingly difficult.

The materials used in Montessori activities are grouped according to a given physical quality of bodies, such as the state of roughness, color, shape, size, sound, weight, flavor and so on.

Jar of calm: what it is
The jar of calm helps the little ones to regain their self-control on their own. Just shake it and the glitter from the top will slowly float to the bottom. Like watching snowflakes falling from the sky, the jar of calm has a calming and soothing effect on the baby.
While the child looks at the jar, also ask him to take deep breaths or to count.

It is wrongly attributed to the Montessori method.

Diaper: how to change and remove it according to the Montessori method
Respect for the child and his times, extreme delicacy in his gestures, preparation of an environment that promotes autonomy: these are the fundamental ingredients of a Montessori-style approach to the diaper.

Here are some of the most popular Montessori games for toddlers:

Montessori activities for most great:

Montessori: 20 activities to do in the summer with children

Prepare a popsicle, paint with water, wash the shells collected on the beach, write in the sand, compose a bouquet of flowers ... Here are some activities to do in ...

How to put in order with the Montessori Method

L'environment plays a fundamental role in the Montessori Method: if organized in the right way, in fact, it offers the child the opportunity to engage in an interesting and freely chosen job, which leads to long periods of concentration that should not be interrupted.

From the earliest years we can create corresponding activities that educate the child in manual skills, concentration and autonomy, also useful for tidying up.

La casa it is the ideal field to promote the motor and cognitive development of the child through practical and daily activities. The "practical life exercises " Montessori respond to the need to move of every little one: it is a 'work' guided by intelligence, and this makes every movement varied and interesting for the child.

Un Montessori home environment it must allow the child to have at hand objects useful for his practical life exercises.

the environment must not be created to prevent damage, but so that the child can use it and learn how to do it in the right way by developing the necessary dexterity. Make sure that the environment is orderly, that there is a place for everything and that everything has a place to respond to the child's inner need for order.

And also pay attention to the materials with which the furniture is made - wood and other natural materials heights - with sockets, shelves and solutions within reach of the child.

Montessori School: what it is and how it works

In the children's homes, everything translates into freedom of doing', explore and move where the adult is an observer and a guide, helping and stimulating children and letting them learn freely, following their natural curiosity, even multiplication tables and mathematics. This allows children to act, desire and think for themselves and help them develop inner self-confidence and discipline.

Montessori birthday: how is it celebrated?

Maria Montessori proposes a very original and creative ritual to celebrate the passage from one year to another of the child, a way to really put him at the center of the party.

A circle divided into twelve segments is prepared with the names of the months. The Sun is drawn in the center of the circle and a candle is placed next to this symbol. Outside the segment that represents the month in which the child was born, a globe and as many candles are placed as the number of years that the child celebrates. At this point, a notebook with photos of the child is prepared. This notebook will accompany the little one in his growth, clearly showing how he looks like him and telling the salient events that he has experienced with the images. All the guests, including educators and parents, sit around the circle. The birthday boy lights the candle of the Sun, symbolizing the moment in which he came to light. Holding the globe, symbol of the Earth, he then turns around the Sun starting from the month in which he was born and proceeding in the sense of the calendar. He will make as many circles around the circle as the number of years he turns. At each turn, the child will tell the most important events of the year lived by showing the photos of his notebook relating to that year and will light one of the candles placed next to the segment of the month of birth.

The Montessori bibliography is quite varied and vast. However, we can suggest some books that are good to read if you intend to deepen the Method.

TAG:
Ogino Knaus method: what it is and how it calculates the fertile period ❯

add a comment of Montessori method, the complete guide