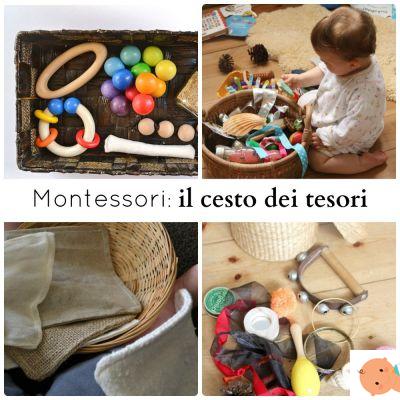 Montessori activities for babies from 3 to 6 months

Not everyone knows that the Montessori method it can also be applied at home and on newborn children: the Montessori model is not confined to the school environment, but there are ways of using it also on Infants. Simone Davies and Junnifa Uzodike, in their book "The Montessori baby" (The green lion, 2022), they recommend many Montessori activities suitable for 3 to 6 months.

The Montessori approach to newborns

The Montessori Method is a didactic approach, but it is not limited to the traditional concept of education which requires the adult to teach the child. Rather, it is a broader vision, which includes all the activities and experiences that the little one has the opportunity to live, from his earliest days. The Montessori philosophy aims to guide the natural development of the child until he reaches his maximum potential. Since learning begins from birth, this approach can also be applied to newborns and presupposes some general attitudes:

A sensitive period is a phase in which the child develops an attraction or an interest in a skill / action or in learning a specific skill. Some of the psychic periods in childhood are:

Read also: How to recognize the stages of children's growth

Motor development of the newborn 3-6 months

It is important to note that while we can help our child's development and quality of motor activity, each neurotypical child follows a natural process that cannot be accelerated, only slowed down. Our aim must not be to rush the little one, but on the contrary allow him to acquire ever greater control and coordination.

What to observe from 3 to 6 months:

5 Montessori motor activities to do with your newborn

In the first three months we provide the baby with activities that stimulate his senses of sight and hearing, starting from the third month, we can move on to those that develop his grip and tactile perception.

Linguistic development of the newborn 3-6 months

Between 3 and 6 months the baby:

What to observe from 3 to 6 months:

5 Montessori language activities to do with your newborn

All advice was taken from the book "The Montessori baby" (The Green Lion, 2022) by Simone Davies and Junnifa Uzodike.

Simone Davies She is a Montessori teacher of AMI (Association Montessori Internationale), and she is also the author of The Montessori Notebook, the popular blog and Instagram profile where she offers advice, answers questions and organizes online workshops for parents all over the world . Born in Australia, she lives in Amsterdam with her family, where she runs parent-child courses at her Montessori school, the Jacaranda Tree.

Junnifa Uzodike she is a Montessori teacher from AMI. She lives in Nigeria with her family, where she founded the Fruitful Orchard Montessori school, and is the author of the blog Nduoma, a good life.

TAG:
Infant positive for Cytomegalovirus: everything you need to know ❯

add a comment of Montessori newborn 3 - 6 months: the activities