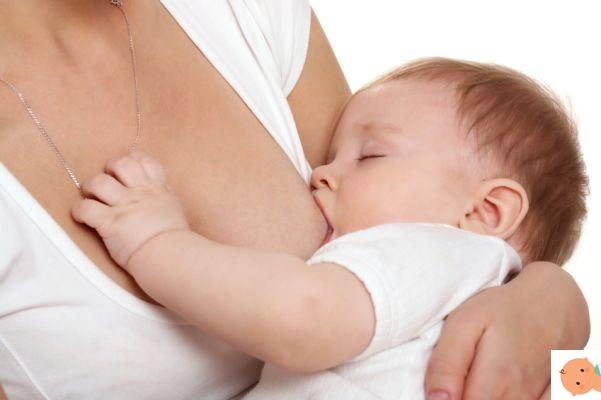 I Montgomery tubercles are those skin reliefs that the woman notices on the areola of the nipple when she becomes pregnant. We know: already in the first weeks of gestation, the breast increases its volume, the nipples change color, they can hurt and moreover they are characterized by these small protuberances. But what are they? Why are they called that and what is their importance during and after pregnancy?

I Montgomery tubercles, in fact, they are fundamental for the mother and for the baby, let's find out why in this guide.

Montgomery tubercles: what they are

I tubercoli di Montgomery they appear, as already mentioned, as small protuberances that appear in the areolar area. It is about sebaceous glands (i.e. deputies to the production of sebum) whose main function is to remove germs from the breast, to lubricate it and to make breastfeeding safe.

In some cases the tubercles look the same as small pimples or greasy spots or they may resemble the phenomenon of "goosebumps". They are all found on the areola which, among other things, changes color during pregnancy and becomes darker.

Il number of tubercles varies according to the number of Montgomery's glands. Some women have more, others less, but it's completely normal. They are neither annoying nor painful and it is important to take care of them by always keeping the area dry and clean.

In addition to pregnancy, Montgomery tubercles can occur in puberty or in case of excess stress, hormonal changes, use of certain drugs, breast cancer, frequent use of too tight bra.

Because they are called Montgomery Tubercles

The Montgomery tubercles, as well as the Montgomery glands, are named after the doctor who first spoke of them back in 1837. It is a question of William Fetherstone Montgomery (1797-1859), an Irish obstetrician.

He was the first to describe them and define their function.

After conception, the woman's breasts begin to change. This is precisely one of the symptoms that indicate - even before the pregnancy test - the onset of gestation. According to the American Pregnancy Association (APA), in fact, breast changes of pregnancy they may appear as early as a week or two after conception.

Especially those women who are in their first pregnancy, could be surprised by the phenomenon, not only that, especially in the hot months the small bumps could give a feeling of dryness and itching. This is why it is advisable to moisturize the breasts often and keep them clean.

According to the most recent statistics, Montgomery's tubercles would be of interest about 3-5 pregnant women every 10 (about 30-50% of pregnant women). It is therefore a symptom that should not alarm if it appears but which may not even manifest itself.

Causes of the appearance of Montgomery's Tubercles

Summarizing, therefore, we can say that Montgomery's tubercles are the result of the enlargement of Montgomery's glands. TO cause their appearance are the hormonal changes that affect women specifically in certain stages of life:

Montogomery Tubercles are very important during breastfeeding as they protect and moisten the nipples and keep germs and infections away.

We could say, in other words, that these small protuberances make breastfeeding safe for the newborn and their role, therefore, is more important than we think.

Even during breastfeeding - as in pregnancy - it is good for the woman to take care of the tubercles by washing them not with soap or oils, but simply with water.

Nail polish in pregnancy: can it be used?

add a comment of Montgomery tubercles in pregnancy: what they are