Morula, what it is and how it turns into a blastocyst 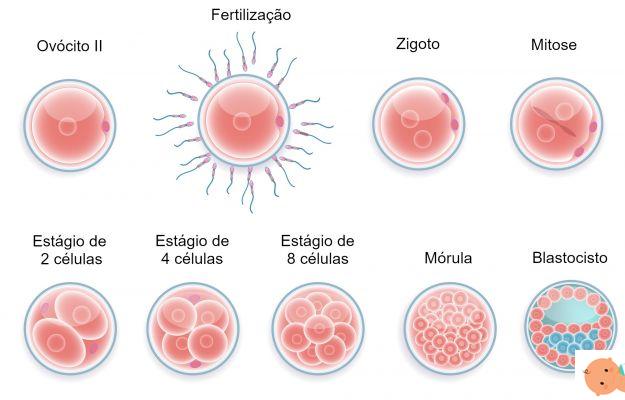 La morula it is one of the first stages in the development of the embryo. We explain in more detail what morula is and how it transforms into a blastocyst, framing the evolution of the embryo also in the context of IVF (in vitro fertilization with embryo transfer).

In fact, during the IVF fertilization takes place by placing the oocytes in a culture medium for about three days and the embryo is in the morula phase.

Morula, what is it

The morula corresponds to one of the very first stages of development of the embryo, exactly after the first 3 or 4 mitotic divisions. Generally the morula stage is reached at the completion of the third day of fertilization.

Morula, how many cells does it have

The embryo up to 16 cells is called zigote. Instead, from the 16 64 cells is identified as morula. This name is used because the small cluster of cells looks like one at this stage of development must.

Thus, the embryo arrives in the form of a morula (16 cells) in the uterus, approx three days after fertilization.

Two groups of cells are identifiable in the morula: i blastomeri, more peripheral, which will subsequently give rise to the trophoblast, and those who are in a more central position which, instead, will give rise toembryoblast, or embryo. So the blastomeres are intended for different tasks.

When the blastocyst is formed

After the 64 cells, the embryo transforms, from a full cluster, into a mass with a central cystic cavity and is called blastocisti.

In particular, with time, liquid penetrates into the morula and is arranged in the interstices between the blastomeri located in the central portion: the more the liquid filters, the more the spaces between the blastomeres merge and form a single cavity, the blastocele. This phase is reached at the end of the fourth day of fertilization and we no longer speak of morula, but of blastocisti.

During the IVF (in vitro fertilization with embryo transfer) the oocytes are placed in a culture medium for about three days: thus they are fertilized. The embryo transfer in women it is carried out using a flexible catheter.

In particular, the embryos are inserted into the flexible catheter, which is passed through the cervix, after which the contents are injected.

L'plant occurs six or seven days after fertilization. The embryo, made up of about 180 cells, begins to fuse with the endometrium, which lines the wall of the uterus and offers a perfect environment for embryonic development, where the blastocisti it is nourished by the substances produced by the endometrial glands.

The nesting of the blastocyst in the endometrium ends by the thirteenth day from conception. It is also caused by a series of complex interactions between the trophoblast and the lining of the uterine cavity.

In the case of IVF, biologists carry out monitoring of the development of the embryo and implant.

TAG:
Motherhood penalty: what it is ❯

add a comment of Morula, what it is and how it turns into a blastocyst