Mosquitoes and pregnancy: how to defend yourself? 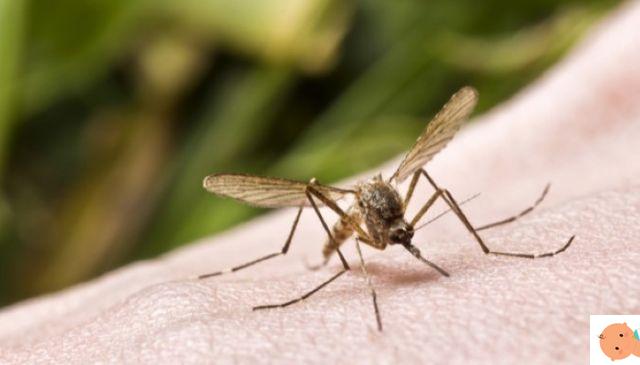 Mosquitoes and pregnancy, how to protect yourself? In many places, in Del Paese, mosquitoes are a real scourge of summer evenings, and not only: Tiger mosquito, the nuisance is assured even during the day. Fortunately, it is possible to defend yourself. There are many on the market mosquito repellent products, more or less effective: from the various formulations to be applied on the skin to the platelets, from the electric emanators of liquid insecticides to the classic zampironi, up to the spectacular torches and garden candles.

In pregnancy, however, some doubts may arise as to their safety

After all, it is still a question of repellents or insecticides: sure that they do not harm the fetus or the embryo? We turned the question over to the toxicologist Georgios Eleftheriou, doctor of the Poison and Toxicology Center of the ASST Papa Giovanni XXIII di of the city. Which generally responds reassuringly, stating that many of these products can use safely even during pregnancy.

Repellents to be applied to the skin

Let's start with the products to be applied to the skin, in the various possible formulations: sprays, wipes, gels, lotion. Among the active ingredients that can be found most commonly in these products we find

"It is inevitable that some of the active ingredient is absorbed in the skin and reaches the fetus via the placenta," says Eleftheriou. However, specifying that these are minimum quantities, deemed to be such as not have significant effects for the embryo or fetus.

In some cases, the confirmation of safety comes from various scientific studies: both experiments performed in the laboratory with animals, and observations that have involved several thousand women over time. "In many countries around the world, mosquitoes are not only a nuisance, but they can carry important diseases such as malaria, or more recently, the Zika virus. "emphasizes the doctor.

Insect stings and bites: a small guide to recognize, manage and avoid them

In spring and summer, as we know, insects swarm. From "banal" mosquitoes to scorpions, here are those who threaten children (and others), with some useful information on how ...

For example, an article by MotherToBaby, an information portal on the risk of the use of drugs and other substances in pregnancy, published by a North American association of specialists in teratology, the discipline that studies anomalies and malformations fetal.

The most studied repellent is Deet, for which there are consistent data referring to both animals and humans. Data which, the article states, suggests that there is not a significant increase in the risk of fetal problems when used in pregnancy, either in the first trimester or later. Also for icaridin and PMD the risk profile seems similar, although in this case the results come exclusively from animal studies.

In short, for icaridin, PMD and above all Deet - also recommended by the Centers for Disease Control (CDC) in Atlanta and by the American Obstetric Gynecologists Association - it is a green light for use in pregnancy.

And as for the natural products (including eucalyptus essential oil, which is different from PMD or Citrodiol)? "Here, paradoxically, the situation is more critical, because there are no studies, neither on animals nor on humans," says Eleftheriou. Adding that it is unlikely that there can be significant clinical risks, which however at the present state of knowledge cannot be definitively excluded. On the other hand, these products are also tendentially less effective, so there is a risk of not being alone less safe, but also less protected. In short, when in doubt, it is better to avoid.

Which products to choose

One aspect to pay attention to when choosing the repellent to use is the concentration of active ingredient, which varies from product to product even among the various lines of the same brand. "The different concentrations account for differences in the duration of protection: a mosquito repellent with Deet at 25%, for example, will guarantee protection for about 10 hours, while a product with Deet at 10% will guarantee it for two / three hours" explains the toxicologist. .

The choice, therefore, depends above all on the circumstances, even if, in general, the product with the lowest concentration is perfectly fine for the needs that may arise in our country.

Finally, according to Eleftheriou, there are no big differences in terms of absorption as regards the different formulations, so you can choose the preferred one.

How to apply them

Here's tips from MotherToBaby and the Atlanta CDCs (they apply to everyone, not just pregnant women):

Again there is a great variety. Platelets, coils and liquid insecticides generally they are based on permethrin or other pyrethrins. "The epidemiological data available say that, if used according to the manufacturer's instructions, they should not pose significant risks" says the toxicologist. In particular: the coils should always be used outdoors, never indoors, and in the case of liquid insecticides and platelets it is always necessary to ventilate the rooms well before staying there again.

Same speech for citronella-based candles and torches: green light to a moderate use and only outdoors, avoiding inhaling the fumes emitted. However, it must be said that they are not particularly effective tools. "In any case, it is always a good idea to check what they contain: often on the market there are products in which it is not even indicated what is inside, and these are certainly to be avoided" advises Eleftheriou.

Additional tips to reduce the risk of stings


You hear it often, but in reality There are no definitive conclusions on this topic, also because there is a lack of data and serious observations in this regard.

Often, those who argue that pregnant women are more "attractive" to mosquitoes do so on the basis of a study conducted in The Gambia and published in 2000 in the Lancet journal. The study compared the number of mosquitoes found in the morning under the mosquito nets covering the beds of pregnant and non-pregnant women, finding that in the first case they were actually more (about double). A fact that the authors had explained by calling into question a greater emission of carbon dioxide and a higher body temperature by future mothers. Both factors can attract mosquitoes. But beware: the study involved too small a number of participants to be able to draw definitive conclusions (72 women in all) and above all it could not exclude the possibility that under the mosquito nets of pregnant women there were more mosquitoes simply because these women opened them more often of the others, getting up to go pee.

Another study conducted in Sudan in 2003 had reached similar conclusions, but even in this case there were obvious methodological limitations, starting with the even smaller numbers (18 women in total). Moreover, the greater attractiveness of pregnant women was related to a single species of mosquito and not others also present in the area. TAG:
Ticks and children, how to prevent them and how to remove them ❯

add a comment of Mosquitoes and pregnancy: how to defend yourself?