Motion sickness and children: what it is and how to prevent it 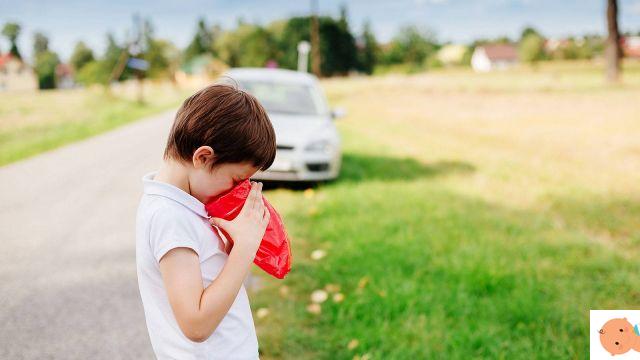 La motion sickness o chinetosi o movement disease it is a rather common disorder, which mainly affects children between the ages of 2 and 12. Furthermore, women are particularly affected during pregnancy. This is not a real disease, but the car sickness it can be the source of various ailments in those who suffer from it, making the journey particularly unpleasant.

Let's see together what is the motion sickness, what are its causes, how to prevent it and what measures to follow to avoid it.

Motion sickness: what it is

Motion sickness is caused when the brain is sent conflicting messages from the organs involved in balance: inner ear, eyes, muscles and joints. In particular, the inner ear sends a different signal to the brain than the one that comes through the eyes: this generates confusion and consequently malaise.

Causes of motion sickness includehypersensitivity of the center of balance (labyrinth / vestibular apparatus) located in the inner ear which, in predisposed people, stresses the central nervous system (brain and spinal cord) more than necessary.

This happens because when traveling on a means of transport, the brain receives signals from different organs, but in some cases such signals can be conflicting with each other.

For example, if you read while on the bus, your eyes are focused on an element, the text of the book, newspaper, etc., which is stationary. The inner ear, on the other hand, perceives the movement of the means of transport on which it is located and sends a different message to the brain than that communicated by the eyes.

The main symptoms of motion sickness are:

Some of these symptoms can occur at the same time. Normally, the disturbances cease at the end of the trip.

They exist on the market several drugs to counteract the ailments caused by motion sickness. In most cases they have a mild action and do not require a prescription.

Finally, it should be remembered that, to avoid or reduce the discomfort caused by motion sickness, it is sufficient to follow some precautions and avoid certain behaviors.

Read also: On vacation with children, traveling by car

Here are some measures to reduce the annoyances of motion sickness:

For those with small children, we also recommend:

Finally, we suggest some behaviors to avoid if you suffer from motion sickness.

Read also: Car sickness and children: how to deal with it

How to entertain children on a car trip?

Remember to bring a blanket, cushion, and favorite puppets or other small games that the child is fond of. For the little ones, equip yourself with the classic games that you can put in your mouth ... They always help!

How to prevent motion sickness in children?

Let him have a small snack before the trip. If the journey is long, have him snack frequently, with crackers or breadsticks.

The action mechanism of the motion sickness bracelets is based on the compression of the P6 point of Chinese medicine. Having no side effects, the bracelets can be considered even in younger children.

TAG:
Five things to say to babies instead of "stop crying" ❯

add a comment of Motion sickness and children: what it is and how to prevent it