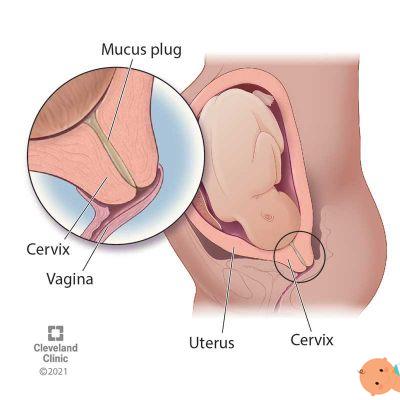 During gestation we hear about a mucous plug, especially towards the end of pregnancy. Often, in fact, reference is made to the loss of the mucous plug which, in some cases, can signal theonset of labor.

What is the mucous plug and what is its function

"The mucous plug is condensed cervical mucus, a gelatinous substance that has the purpose of protecting the uterine cavity from the ascent of bacteria or fungi that could cause infections and therefore a premature birth" explains Eleonora Iachini, gynecologist at the Santagostino Medical Center.


Read also: The loss of the mucous plug

Has a White color, with red or pink streaks, in some cases yellow-orange, and differs from blood loss in consistency. Leave a mark on your panties or while peeing and its release is clearly noticeable.

«The formation of the mucous plug does not give symptoms to the future mother and it occurs already in the early stages of pregnancy, under the hormonal push: the glands of the cervix begin to gradually produce a denser and more gelatinous mucus ».

Expulsion of the mucous plug before the term of pregnancy

"Recognize the loss of the mucous plug it is very easy: compared to all the watery losses that occur during pregnancy, in fact, the cork is a lot denso, similar to a clear jelly. However, some women do not realize it ».

If you are not close to the end, then before 37 weeks of pregnancy, «Whatever the color of the mucous plug and its consistency, it is necessary to do a check. Doctors will have to figure out if labor is starting, at the risk of a preterm birth and, if necessary, proceed to hospitalization to try to lengthen the time ».

Expulsion of the mucous plug in case of full-term pregnancy

If you are over the 37th week, the expulsion of the mucous plug could be the signal of the onset of labor and therefore of delivery. «However, it is not certain that the birth is close: the loss of the cork, in reality, is a phenomenon that is considered" passive ", that is due to other bodily modifications that signal that the term of pregnancy has been reached. But the time that passes between her loss and the onset of labor is very subjective: up to two weeks can pass ».

Loss of plug and blood loss

A special case concerns blood losses. «If, together with the mucous plug there are traces of blood, the expulsion could more easily indicate the approach of the moment of delivery. In fact, blood can originate from changes in the cervix which, under the pressure of even imperceptible contractions, begins to yield and dilate ».

Read also: Have you packed your suitcase for the hospital?


In any case, if there is a loss of live blood it is good for the woman to go to the emergency room to check her own health and that of the fetus.

The prodromal phase of childbirth

Classically, childbirth tends to be divided into four phases:

During the prodromal phase, the mucous plug may be lost. It is a moment that can last from a few hours to a few days: some mothers do not even notice it. Contractions are generally irregular and more or less intense, but still bearable.

TAG:
Tattoos and piercings: how to handle the requests of teenagers ❯