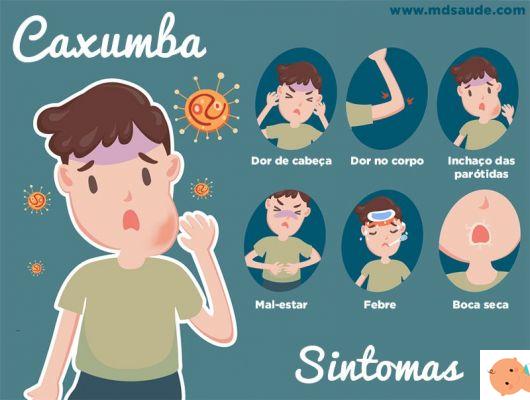 Mumps is one infectious disease caused by a virus belonging to the Paramyxovirus group. It is also known by the common name of "mumps" because its characteristic symptom is the swelling of the area under one ear (or both).

They are actually the ones that swell parotid glands, the largest of the salivary glands.

The disease is typical of children between 5 and 10 years, while it is very rare in those less than two years old. The introduction of the vaccine has significantly reduced the frequency of the disease among children. However, if vaccination coverage is lowered - as is happening in our country - mumps tends to become more frequent in adults, where complications are also more likely to occur.

The disease mainly spreads in late winter and early spring.

Symptoms of the disease

Typically i early symptoms are not very specific and can be confused with those of a classic flu:

Already the next day (or at most a few days later), however, also the most typical symptom appears, namely the swelling of the area under one ear, or both, roughly around the corner of the lower jaw. It is associated with swelling pain when chewing and swallowing.

Pain and swelling are due toinflammation of the parotid glands, the largest of the salivary glands. Usually one parotid is affected first and after a couple of days the other as well, but it is not uncommon for only one side to be affected.

In some people, infection with the mumps virus has no symptoms, while in others, only nonspecific ones occur and there is no swelling of the parotids.

You should hear your doctor as soon as you suspect your baby may have mumps: he will advise you what to do and how to avoid spreading the infection to others and will rule out other infections that may have similar symptoms at first, such as tonsillitis.

The diagnosis is essentially clinical, that is it is based on symptoms. In doubtful cases, the doctor may request a blood test to confirm or not the presence of antibodies to the virus (if there are, it means that the disease is present). Even more rarely, the virus can be looked for directly in the saliva.

How it is transmitted

Like those of the flu and colds, the mumps virus is also transmitted through infected droplets of saliva or nasal mucus, therefore mainly through coughing and sneezing, or by direct contact with contaminated surfaces. The disease is contagious for a few days before and after symptoms appear.

If your child has mumps, you should try to limit the spread of the disease by keeping him home from school for at least 5 days after symptoms appear.

Infection guarantees permanent immunity: it means that you cannot get sick a second time.

There is no specific therapy for measles, therefore treatment is for symptoms only. In particular, acetaminophen or ibuprofen can be used to lower fever and pain relievers (again, acetaminophen) to relieve pain caused by inflammation.

A semi-liquid diet and the application of heat or cold can further help in this regard.

For the duration of the illness, it is good to keep the baby at rest and well hydrated.

In children, the mumps pass in a few days without any consequence in the vast majority of cases. However there can be - rarely - complications, including encephalitis with long-term consequences, meningitis, pancreatitis and hearing damage: in about 5 cases every 100 of the disease hearing loss.

Complications are more common in adults and in males they also include orchitis, that is, inflammation of the testicles that can lead to testicular atrophy and, in some cases, even to infertility. Orchitis affects about 5 out of 10 males affected by mumps as adults. Inflammation of the ovaries in women is possible but less frequent (about 5% of cases).

Infection in the first 12 weeks of pregnancy is associated with a increased risk of miscarriage, which reaches 25% (one in four pregnancies is lost). However, there is no increased risk of fetal malformations.

How it is prevented

In addition to compliance with good hygiene standards (essential wash your hands well and often, and remind your children to do it!) the best weapon against the disease is the vaccination.

In Del Paese, the vaccine against mumps is typically combined with those against measles and rubella (MMR) and is given to children in two doses: between 12 and 15 months and around 5-6 years. However, vaccination can be done at any age.

Since it is a so-called attenuated vaccine - that is, containing live viruses, as far as they are made as harmless as possible - the vaccine is not recommended for people who have deficiencies in the immune system and for pregnant women.

A huge mass of studies conducted over the past 15 years have shown that there is no correlation between the administration of this vaccine and the risk of autism.

add a comment of Mumps in children (mumps): symptoms, prevention and treatment