Music and children: this is why it is essential to start early 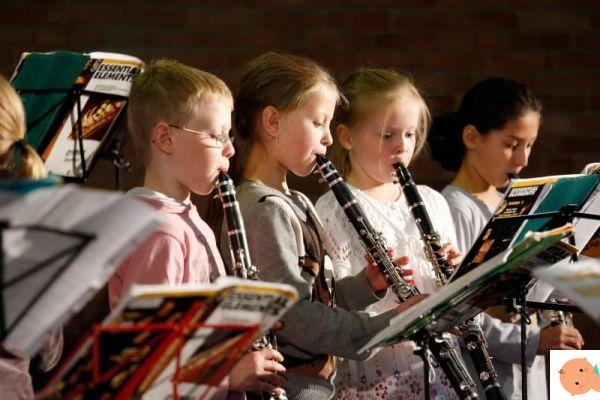 Music entertains, relaxes and excites and helps to live better.

But not only that, today there are many researches that are discovering the great benefits that music lessons have on children.

A German longitudinal study from 2022 highlighted the importance of studying music:

"Music improves cognitive and non-cognitive skills more than twice as much as sports, theater or dance."

"Children who take music lessons have better cognitive skills and better school grades and are more conscientious, open and ambitious."

But that is not all. The American website mic.com has compiled a list of all the neurological benefits that music lessons can provide.

There are many studies that have found a link between musical and linguistic processes.

E the children tested who make music have better reading results than those who take non-music courses.

Music is deeply mathematical in nature. The mathematical relationships determine the intervals in the scales, the arrangement of the keys and the subdivisions of the rhythm.

Then a children who receive high-quality music training tend to perform better in math as well.

A Canadian study from 2022 also found the same association.

While neither of these studies can necessarily prove causation, they both show a strong correlation.

Read also: How to introduce children to music?

While music is primarily an emotional art form, according to a University of California study, music training actually benefits academic IQ more than emotional IQ.

This does not mean that those who study music are necessarily more intelligent than those who do not study it, but it certainly makes a child smarter than they would have been without music studies.

These benefits not only impact first language learning, but also on children's ability to study foreign languages.

According to the British newspaper The Guardian "L'music training plays a key role in learning a foreign language, facilitates the study of grammar, vocabulary and the ability to speak ".

The musical training rIt makes the ear more sensitive, which is very useful as you get older. Indeed, musicians enjoy less decline in central auditory processing. And they manage to avoid the phenomenon where older people have difficulty isolating voices from background noise.

7. Slows down the effects of aging

In addition to the auditory one, musical training it can also delay the cognitive decline associated with aging

Some research positions music as an effective way to stave off dementia.

Studies carried out by the University of Emory (Atlanta, USA) have found that even if musicians stopped playing when they were older, they have better results in terms of remembering the names of objects, visuospatial memory and rapid mental processing and flexibility, compared to others who have never played. The authors of the study add, however, that to have these results, musicians must have played at least 10 years.

Read also: Those who study music as a child age better

All musical instruments require high levels of finger dexterity and accuracy. Practicing with a tool develops the motor cortex and the benefits extend to various non-musical skills.

Research published in the Journal of Neuroscience in 2022 found that children who started playing before age seven perform better at even non-musical movement tasks.

Playing requires a great deal of memorization. And the more you practice with a tool, the more your working memory (or short-term memory) gets stronger. A 2022 study found that musical practice develops the mnemonic abilities of musicians, their processing speed and their reasoning skills.

Scientists from the University of Texas at Arlington in a study last year showed that classically trained musicians who have played for more than 15 years they scored higher on long-term memory tests.

This heightened visual mnemonic sensitivity derives from the analysis of complex musical scores. The studio did not consider musicians who play without reading music.

Analyzing the brain scans of musicians ages 6 to 18, researchers at the University of Vermont College of Medicine found a huge thickening of the cerebral cortex in areas responsible for depression, aggression and attention problems. According to the study authors, musical training "accelerated cortical organization in the areas of attention span, anxiety management and emotional control."

Several studies have shown how music can improve the safety and self-esteem of children. A 2004 study divided a sample of 117 fourth-grade pupils from a Montreal public school.

One group took a weekly piano course for three years, while a second group did not take music courses.

The children who played weekly got it significantly higher scores on self-esteem tests than other pupils.

But most of the research

According to Ana Pinho, a neuroscientist at the Karolinska Institute in Stockholm, Musicians with experience in musical improvisation have more developed activity in the brain regions associated with creativity.

add a comment of Music and children: this is why it is essential to start early