Music during pregnancy? Yes thanks 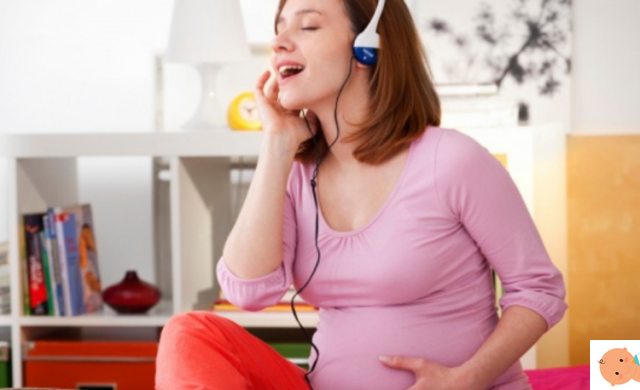 Surely you have done it too many times. Every future mother caresses her baby bump, by instinct, almost without realizing it, and she begins a subdued dialogue with the unborn baby. A gesture of love, common to all women, which "anticipates" by centuries what science has confirmed today with the help of diagnostic tools. The baby, already in the intrauterine life, feels and reacts to external stimuli: if the mother is happy and relaxed, she perceives it and, in the same way, discomfort or anxiety "pass". Read also Pampering the baby in the belly

A scientific fact - strongly emphasized by doctors and midwives: "No stress!" - always known, in a completely spontaneous way, to mothers. They talk (and always have), or sing to their little ones and the voice is the first musical experience of the child, “like a caress on the skin”.


To support it is Andrea Apostoli, musician, trainer in birth preparation courses, president of AIGAM, the Gordon Paesena Association for Music Learning (www.aigam.org), and author of the book "But what music ... in sweet expectation!" (Curci Editions).

But then, if Mom likes it listening to music and relaxing, does it have the same effect on the baby in the belly? Does listening to a song therefore give a sense of well-being to the mother-child couple? And then, how does the newborn perceive a melody? Here is what Andrea Apostoli says.

It's all about emotions

The watchword in pregnancy is no impositions. The emotional state of the mother is perceived by the fetus during all daily experiences. “If the mother forces herself to listen to Mozart because they told her that she is good, better let it go”, explains Andrea Apostoli, “her sense of boredom will also reach the child”.


What matters is to live pleasant experiences and this also applies to music: "In recent times, a current has been affirming that emphasizes the woman's body, emotions and the ability to listen to oneself, - affirms Apostoli -" for years, on the other hand, all the attention has been focused on "what to do" at the time of delivery and the classic courses have always had a very informative approach (labor, breathing, pushing techniques) ".

But the attitude towards childbirth is also changing: “Today, more and more gynecologists and obstetricians advise mothers to pronounce vowels or sing. The opening of the larynx also favors that of the perineum and consequently makes the birth itself easier ”- underlines the expert who has been working with pregnant women for over 10 years.

“In other cultures all this is natural, in ours, on the contrary, some knowledge is being recovered through scientific research. So, if for an African or Indian woman it is rather obvious to vocalize or sing little lullabies during labor, for the future Western mother it is not so much ".

A practice, that of the use of the voice which, like listening to a piece of music, should be pleasant and spontaneous to offer benefits to the pregnant woman.

The little one in the womb? Listens...

If the mother gets excited and enjoys listening to a piece of music, the baby in the belly, in addition to the pleasant sensation, what does it perceive? “Already in the womb, the fetus is immersed in a universe of sound. A fact testified by many studies on the subject, including the fundamental ones by the French otolaryngologist Alfred Tomatis ”- explains Andrea Apostoli.


“Intrauterine life is marked by the mother's heartbeat, her voice and her breath. Sound is the first form of communication with the mother: up to the 24th week of the fetus it is as if it were a vibration, a tactile sensation and a caress on the skin. After this period, towards the 5th month, the baby begins to perceive also with the ear and comes into contact with the external sound world ”.

But that doesn't mean it's a good idea to put the headset on your tummy (or even after sticking the iPod into your baby's ears), recommends the expert.

“The music passes to the baby through the mother's body who vibrates while listening and reacts to the sensation produced by those sounds”, the musician reiterates.

Therefore, it is essential that listening to music is rewarding and not a kind of self-imposition because, you know, it is good. The meaning that the mother attributes to an experience, in this case listening, is given to the little one - an aspect that Apostoli is very keen to point out.

Green light, therefore, to listen to all the music that is preferred - not necessarily the classical one - even during the nine months without forced choices. If you don't like Chopin, for example, don't force yourself to listen to him in the name of an alleged benefit to the baby in the womb.

A good idea, however, as suggested by the Apostles himself, is to create a sort of compilation with the favorite songs to accompany the sweet expectation (or buy a CD with a vast repertoire like the one attached to his book).

A compilation for the newborn

The newborn baby does not "forget" a particular song that the mother listens very frequently during gestation. Obviously it is not that she "recognizes" him in the literal sense but it is certain that she reconnects him to a feeling of tranquility, of pleasure. "The child changes attitude, becomes more intimate, reacts to listening to a melody that has kept him company for many months", explains Andrea Apostoli.

The mother can continue to offer the newborn the soundtrack of her pregnancy or create a new special compilation to listen to together: also in this case, if she likes it and relaxes, it will have the same beneficial effect on the baby.

“The baby's sense of pleasure and relaxation will be even more powerful if the mother herself intones a little melody or sings a lullaby - says the musician. And this special moment can be transformed into a daily ritual, the classic song for sleeping every night, a pleasant experience that strengthens the mother-child bond ".

A musical ritual that can evolve and change with time (and the age of the child) but which is important to follow in the first years of life without constraints: "Listening to good music is a great opportunity for the child who absorbs a lot from listening . But it absolutely must not become a torture ”, continues Andrea Apostoli.

The habit (and education) of listening, in a certain sense, avoids a lack of evolution of potential resources. According to the expert, in fact: “Every child is born with a musical aptitude - it is not directly inherited, there are parents who are denied with very good children - which develops when it is still small. Quality musical experiences help to develop it ". To do this, it is sufficient to propose listening to music while the child is playing, for example, or to share the special occasion of a concert together.

However, it is also necessary to dispel a false (and rather widespread) myth about the properties and hidden power of music that can transform any child into a little genius: "Every language, including music, supports, and helps, the learning of a another language ... But this does not mean that music makes a child a monster of skill in mathematics or in Del Paeseno. Music is not magical ”, concludes the expert. Let's not forget it.

Download free Mp3s for pregnancy and newborn from mymodernparents.com!

Do you want to know or ask advice from other future mothers? Enter the forum, pregnancy section

add a comment of Music during pregnancy? Yes thanks