"My Brother Chases Dinosaurs", the first trailer is out 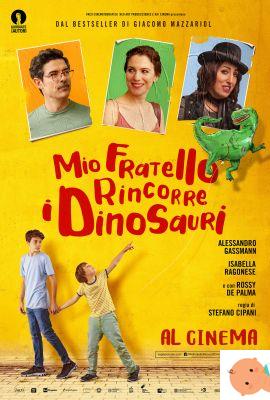 The trailer has just been released which anticipates some scenes of the new film distributed by Eagle Picture and based on the novel of the same name by the writer Giacomo Mazzarol. The feature film in question is "My brother chases dinosaurs", which tells the adventures of two little brothers.

The director is Stefano Cipani and the actors include Alessandro Gassmann and Isabella Ragonese, with the participation of Rossy De Palma. On 5 September the film will be in Del Paesene cinemas.

"My Brother Chases Dinosaurs" tells the story of Jack, a child who always wanted a brother to play with. When Gio is born, the parents tell Jack that his brother is a "special" child. From that moment, in the fantasy of the child protagonist, Gio becomes a superhero, endowed with incredible powers, similar to a cartoon character.


Later, growing up, Jack discovers that in reality his little brother has Down syndrome and this becomes a secret for him not to reveal. When Jack arrives in high school and falls in love with his age Arianna, he decides to keep her brother's existence a secret from the girl and her new friends.

But it is impossible to ask to be loved by hiding such an important part of yourself. The truth will soon come out and Jack will be able to be overwhelmed by the energy and vitality of Gio, who thanks to his original point of view will be able to transform the world, in the same way as a superhero.

YOU MAY INTEREST: 21 films to see with babies

HERE IS THE TRAILER:

Eager to know which children's films will be released in 2022? Here is a photo gallery with the titles of the most beautiful, including "Remi", "Mia and the white lion", ...

add a comment of "My Brother Chases Dinosaurs", the first trailer is out