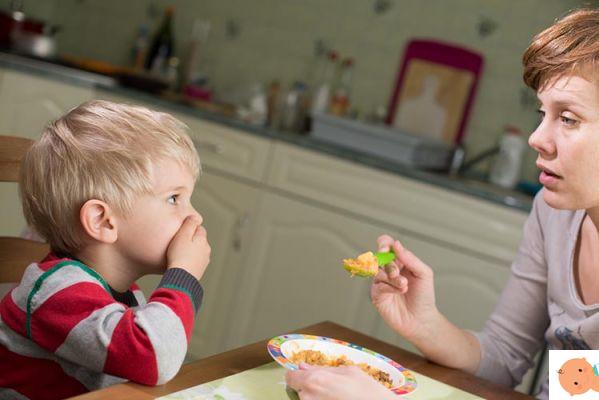 “Look at the airplane… zzzzzzz… zzzz…. Good boy!" The boy got distracted for a moment and opened his mouth that had been locked for five minutes. You slyly managed to shove the spoon-airplane full of baby food into his mouth. Yay, mission accomplished. You have not yet had time to enjoy the victory that you feel your face covered with sweet jelly ...

“First of all we must always keep in mind that the eating behavior of the human being from birth is structured within a relationship, from the mother's breast, to the spoon, to the family lunch. Therefore the nutritional act is closely linked to the emotional relationship. A one-year-old child who refuses food does so because he is affected by the renunciation of the exclusive relationship with his mother. And he struggles to accept the novelty of the spoon ”explains the psychologist Aurora Mastroleo, specialized in eating disorders in children, as well as founder and vice president of the Pollicino Association and Parent Crisis Center.

What should be done if the baby does not want to eat?

First of all, and this applies to all ages, you need to consult your pediatrician to rule out something organic. If the baby is in good health, then the refusal to eat is likely due to difficulty in accepting the switch from breast milk to baby food. So the little one must be helped, reassuring him continuously and offering food in a very gradual way. It takes patience and respect towards the baby, as when entering the nest.

How nice to be able to touch food: study it, manipulate it, smell it before eating it. A real passion for every child! We offer you some healthy and fun ideas to train all the senses ....

And if the refusal instead lasts for two years?

At this age, the protest against food could be read within a framework of general whims. It is the phase, also known as the 'terrible twos', where children begin to claim their identity and this claim can manifest itself right at the table. The child claims his place in the family.

What should be done?

The advice is to respect the protest but looking for a negotiation so that the little one eats some foods and does not suffer from nutritional deficiencies. For example, if he has a tantrum as soon as he sees something green on his plate, you can try to offer him vegetables of other colors or make a pact, 'okay, don't eat green vegetables, but try orange carrots ...'. The important thing is to mediate and never insist. Insistence only breeds resistance.

But what if the problem reaches three years?

We could be facing a protest because something in the child's daily life is wrong. Usually the refusal of food is a way to stage the love question: "Who am I to you?" and it can arise in the child at a particularly difficult time for him. For example: the nursery, a new nanny, a vacation that makes him feel far from his environment ...

What should be done?

The child is going through a difficult but transitory phase, it is a discomfort linked to a moment of growth. He should therefore not be considered a sick child, nor with problems. Also in this case we must not insist on making him eat. Food refusal always wins. In addition, mum and dad must make an effort to stay calm during meals. Instead, it is important to try to understand what is wrong. We need to talk about it with the pediatrician, the nursery school educators, investigate if everything is okay with the nanny.

10 rules for re-educating picky children at the table, at the Bambin Gesù Hospital

TAG:
My child doesn't want formula milk. What to do? ❯

add a comment of "My child does not eat" (or eats very little). Possible psychological reasons