My child doesn't want formula milk. What to do? 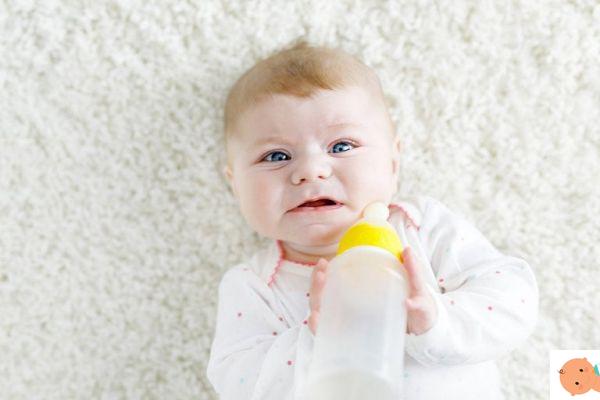 Why does it happen that one-year-old babies refuse milk other than that of the mother's breast? How to introduce it in the baby's diet? Here are all the neonatologist's answers to a mother.

"I have an 11 month old son who is still breastfeeding. I can no longer breastfeed him due to various problems, but he does not take any brand of milk, not even with biscuits. How do I do it? I also tried not to give him the pasta to see if he was hungry but it doesn't work. " (question arrived on the Facebook fanpage)


responds Riccardo Davanzo, neonatologist president of the ministerial Technical Table for the promotion of breastfeeding.

Until one year of age, milk is an important food for the baby. "Milk, both maternal and in formula, is a food low in protein but rich in fats, which are essential in such a rapid growth phase like this", underlines the neonatologist. Riccardo Davanzo.

It is not just a question of quantity, but of quality, since there are essential fatty acids in milk that also serve for the growth of the baby's brain. That's why, at least up to 12 months, it is necessary for the baby to continue to milk, to be integrated with solid and semi-solid foods, which provide carbohydrates and proteins that milk is lacking.

After one year of life, however, milk is no longer so necessary for this, if the baby does not like it or is intolerant to cow's milk, he could even do without it.

Little sport, smoking and alcohol during pregnancy. Many babies are still put to sleep on their stomachs, despite the anti-Sinde awareness campaigns and from a very young age they have ...

Why does the baby refuse formula milk?

"If the baby has been breastfed for 11 months, he has become accustomed to the mother's breast, which satisfies him both from a nutritional and a relational point of view, so it is normal for him to refuse another milk that does not taste as good as that of the mother, moreover, does not gratify him even from an emotional point of view ", says Davanzo.

In short, the child knows what he wants and is not easily misled. And from his point of view, he is right.

Read also: Milk for babies before 12 months: why avoid the vaccine

How to make him accept milk other than mother's?

If the mother is unable or unwilling to breastfeed, it is necessary to proceed by trial and error and try to find an alternative that is acceptable for the baby.

Here are some possible solutions.

Read also: Which milk to choose for the baby?

Why does the baby not want formula milk?

If the baby has been breastfed for 11 months, he has become accustomed to the mother's breast, which satisfies him both from a nutritional and a relational point of view, so it is normal for him to refuse another milk that does not taste as good as that. of the mother, moreover it does not gratify him even from the emotional point of view.

How to make the baby accept milk other than the mother's milk?

Some possible solutions are: give the milk with the cup, give the milk to people other than the mother, dilute the milk in the baby food, switch to cow's milk (if the child is almost one year old and considering that dairy milk tastes much tastier than any formula milk, mom could choose to switch directly to cow's milk).

TAG:
My son uses my breasts as a pacifier ❯

add a comment of My child doesn't want formula milk. What to do?