My son smokes joints. What to do? 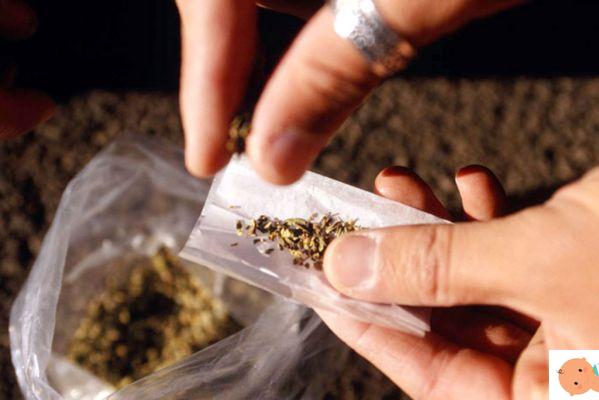 The use of soft drugs

You have suspected it for some time and now you have the confirmation: yours son use the drugs read.

Perhaps it started because friends offered him a joint and then, day after day, the use became more frequent and is now a daily practice.
According to the government's latest annual report on data relating to the state of drug addiction in the country, almost three out of ten boys between 15 and 19 have used drugs, even occasionally. In particular, the cannabis. And in the most serious cases, the effects and consequences are terrible, not only from a physical point of view, but also from a psychological point of view, as we saw for the XNUMX-year-old from Lavagna who committed suicide during a search by the Guardia di Finanza.

For parents there is only one question left: what to do in these cases?

Read also: Adolescence: how to fight the juvenile distress of modern kids

Why does our son make reeds?

Rather than getting angry, it is good to understand the meaning that today has the use of drugs.

«Make yourself one spinel it no longer has that transgressive and oppositional value to parental authority it had 20-30 years ago. Nowadays, the consumption of cannabinoids has more of a soothing purpose, to fight the boredom, sadness and depression of our time "he explains Matteo Lancini, psychotherapist and president of the Minotaur Foundation and author of "We need authoritative parents. Helping adolescents to become adults" published by Mondadori.

After all, today's society does not offer high hopes for boys.

«We keep telling him that they have no future, that it will be difficult for them to find a job, that they will never retire. That is, we are taking away a prospect of the future. And it is also from here that the discomfort of our teenagers».

Therefore, the consumption of this type of drugs does not conflict with parental authority, but is a sign of the suffering of children, which has causes both within the domestic environment, but also in the evolution of our society.

What should moms and dads do when they find themselves in this situation?

«Speaking of the cases in which the boys make daily and not only sporadic use of light drugs, it is good for parents to turn their anger into worry and bans into listening. In these cases, we are in fact called to understand: the solution is not simply to remove or ban the joint, but rather to understand what is the cause that leads children to self-injurious behavior ".

It's like for kids who cut themselves off from society, retreating to their room playing video games: "It's not that if we turn off their computer they are better off: we need to understand the pain that drives them to act in this way."

It is important for the child to understand the parent's concern, but not his anxiety. "It is in fact the relationship between parents and children that can help solve the problem, not the accusations or misunderstandings".

The task of the parents is therefore precisely that of understand the discomfort of children and «to bring him the right resources to create future prospects. First together and then, where necessary, with the help of a therapist ». The goal, moreover, is always only one: to help the boy understand why he is sick, helping him to express his conflict and pain in a less destructive way.

What if you just suspect?

Talk about it together

In case you only suspect that your child is using illegal substances, «The best thing is to start talking, that is, to organize an attempt to communicate with him. This is not to say that theteenager he will admit it, but he will know that the parent is ready to tackle the issue and resolve it together. "

Also read: What to do when teens retire to their room

TAG:
My child has anxiety: three things not to do and three to manage it better ❯

add a comment of My son smokes joints. What to do?