Nail polish in pregnancy: can it be used? 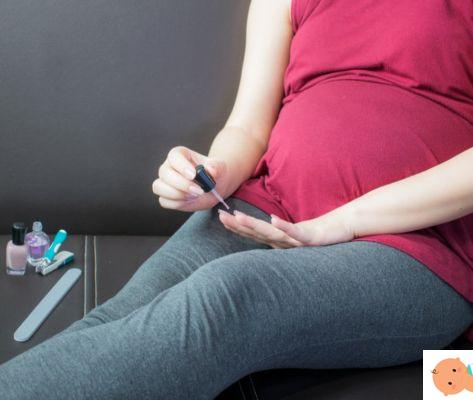 Pregnancy or non-pregnancy, it is better not to abuse the nail polish because it is quite aggressive for the nail plate and the nail matrix. During the nine months, however, it is better to avoid nail reconstruction. Let's see how to use it correctly enamel in pregnancy and which type to choose.

How to use nail polish in pregnancy

The enamel "is not dangerous for the fetus because it is not absorbed in the circulatory level, however it still represents a micro-suffering for the nail plate, so it should not be used continuously, neither during pregnancy nor out of pregnancy" says Angelo Marzano, Medical Director at the Dermatological Clinic of the University of our city.

Green light therefore to nail polish when you want to feel more glamorous. But follow some precautions:

Is it possible to keep the nail polish during childbirth?

Remember to take it off a few days before giving birth, because in the case of a cesarean the doctor needs to check the color of the nails!

Can nails be reconstructed during pregnancy?

"As for nail reconstruction, during pregnancy it is better to leave it alone, and not because it hurts the fetus, but because the substances used damage the nail in a period in which it could already be more fragile" advises the dermatologist.

"Without considering that one should be absolutely sure that the beauty center complies with the hygiene rules, to avoid running unnecessary risks of infections".

How to choose a non-toxic nail polish

In recent years, some lines of Eco-bio nail polishes have been created, aimed mainly at pregnant women. Currently, despite the attempts it is not yet possible to talk about real eco-bio glazes, more correctly they should be classified into:

There are no precise contraindicaizoni to semi-permanent nail polish in pregnancy, however it is best avoided because this procedure damages the nails, thinning and damaging them and the nails during pregnancy are already particularly fragile.

TAG:
Smartphones and children, tips for intelligent and creative use ❯

add a comment of Nail polish in pregnancy: can it be used?