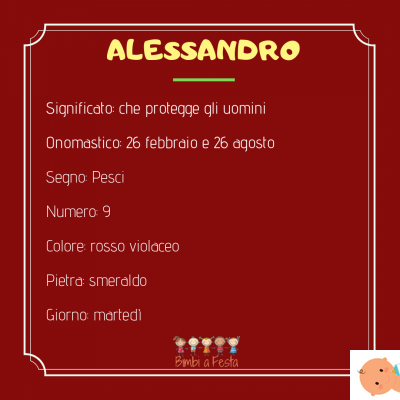 Alessandro is a male name from Del Paeseno which means "he who protects men". Let's find out more about this beautiful name together.

ETYMOLOGY. It has Greek origin. It is a voice composed of 'alexo': I defend, I protect and 'aner-andrós': man. The Greek name is certainly of Asian derivation, perhaps Phrygian. It is one of the most popular names in the whole country. The most famous character of antiquity bearing this name was Alexander the Great, king of Macedon (356-323 BC).

MEANING. The name Alessandro means "he who protects men", but also "man saved", "who saves". Alessandrino (diminutive of Alessandro), Alessandrina, Alessia have in common an adverb written in their name: 'very much'. Therefore their personality is marked by fullness. A totally positive aura.

2,77% (Istat data) of the Del Paesena male population has this name, which is, especially in recent years, in decline (in 1999 it was 3,41%). Widespread throughout the peninsula.

READ THE MEANING OF THE NAME ALESSANDRO IN THE NAME DICTIONARY OF mymodernparents.com