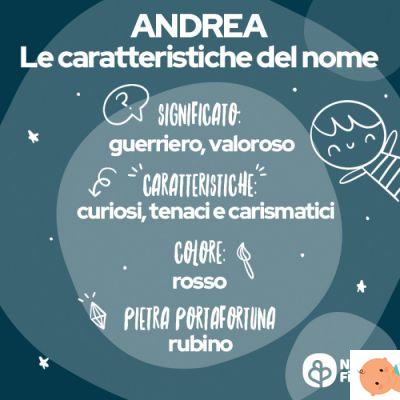 Andrea is a masculine name from Del Paeseno which means "man, virile". Let's find out more about this beautiful name together.

ETYMOLOGY. It has Greek origin. Derivation: from 'anér' - 'andrós': man and 'andréia': fortress. A very widespread name throughout the country, especially in the Center-North, it is linked in the Christian sphere to the cult of many saints, but in particular to the veneration for St. Andrew the Apostle, brother of Peter, martyr in Patras, transfixed, according to tradition, on an oblique cross with beams arranged in an X shape, a type of cross which for this reason is called "di S. Andrea". He is the patron saint of fishermen, Russia and Scotland. In Sardinia, in honor of him, the whole month of November is traditionally called "Sant'Andria".


MEANING. The name Andrea means "man, virile, courageous, strong, indomitable". The greatest characteristic and prerogative of him is virility, connected to the etymology. Dense name that 'burns'.

NAME-DAY. It is celebrated on November 30 (St. Andrew martyr), but also on January 6, February 26, May 13, August 22, October 3, November 10. And there are also other dates on which saints who had the name "Andrew" are celebrated.

2,32% (Istat data) of the Del Paesena male population has this name, which is, especially in recent years, in decline (in 1999 it was 3,91%). Widespread throughout the peninsula.

Variations Of Paesene: Andrea, despite being ambiguous (i.e. masculine and feminine together), has some diminutive and pet name variants:
Male, like: Andreano Andreino Andreolo Andreuccio ...
Female, like: Andreana Andreina Andreola Andrietta ...

Foreign variants: Andrea in Greece: Andreas; in Germany and other multilingual countries: Andreas and Andres; in Catalonia: Andree or Andreu (male); in Spain: Andrés; in France: André and Andrée (female); in England and English-speaking countries: Andrew or Andy and Drew (diminutives); in Sweden: Anders; in Norway: Andrias; in Hungary: András Endre; in Russian and Slovenia: Andrej; in Czechoslovakia: Ondra Ondrei ...

READ THE MEANING OF THE NAME ANDREA IN THE NAME DICTIONARY OF mymodernparents.com