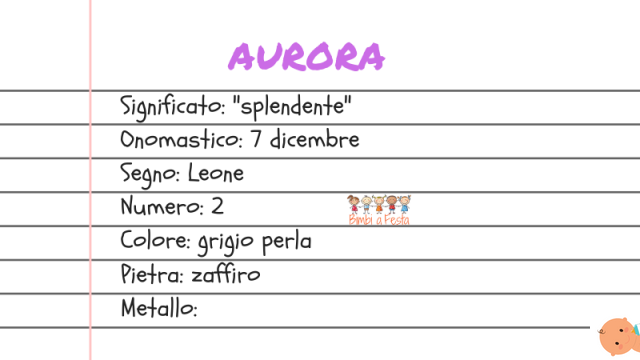 Aurora is a feminine name from Del Paeseno which means "shining". Let's find out more about this beautiful name together.

ETYMOLOGY. It has Sabine origins. It is an auspicious name widespread throughout the country, which began to propose itself in a definitive form during the Middle Ages, although it was already a second female name in the Latin era. In the mythology of the city Aurora was the sister deity of the Sun and the Moon, equivalent to the Greek Eos, who at daybreak got on a chariot pulled by winged horses with which she crossed the sky to announce the next arrival of the sunlight. The name day occurs in honor of a saint who is said to be venerated on the Isle of Man, but about whom all other news is missing.


MEANING. It means "shining, reddish, luminous". Aurora is light, brightness, serenity; her intelligence and her warmth attract many friends, but she sometimes mistrusts bonds because they could be a hindrance to her search for freedom.

NAME-DAY. It is celebrated on 20 October (Sant'Orora or Crora, an Irish nun), but also on 16 June (Sant'Àureo martire).

2,84% (Istat data) of the Del Paesena female population has this name, which has been increasing, especially in recent years (in 1999 it was 1,17%). Over 35.000 are the homonymous Del Paesene tending to increase, thanks to the surge in 2022, when Aurora was placed among the first 7 names of the baptized (place: between Emma and Sara).

READ THE MEANING OF THE NAME AURORA IN THE NAME DICTIONARY OF mymodernparents.com