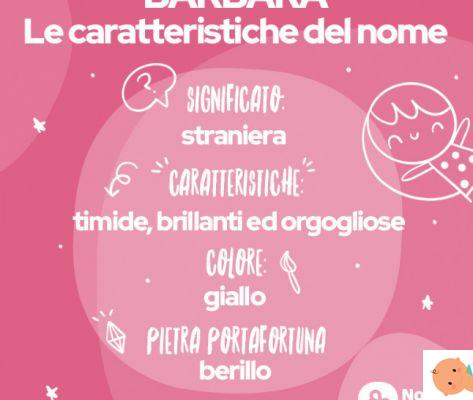 Barbara is a female name from Del Paeseno which means "foreigner". Let's find out more about this beautiful name together.

ETYMOLOGY. It has Greek origin. A legend is linked to this name: Barbara was in fact the daughter of a very rich man, in the Nicomedia of the ninth century, and her parent had destined her in marriage to a man whom Barbara she did not love. The girl refused to marry him, she rejected her father's religion and converted to Christianity. Her father had her tried and sentenced to death. He himself decapitated her but, once the sentence was carried out, a bolt of lightning struck him and killed him. Since then Santa Barbara has been invoked against lightning, considered "bad death" as she does not give time to repent.


MEANING. It means "foreign". Barbara is very shy, but at the same time bright and supportive. Her great determination allows her to stand out and emerge in numerous areas, making her proud of herself.

NAME-DAY. It is celebrated on 3 December in memory of Santa Barbara di Nicomedia, known for being the patron saint of firefighters and bomb squads, but also on 17 May (Santa Barbara, martyr in Cagliari).

Names like Jasmine, Alyssa, Noa, Zahra, sound exotic and peculiar, but they are ancient names and with beautiful meanings. We have selected 30: all original and very chic.

READ THE MEANING OF THE NAME BARBARA IN THE NAME DICTIONARY OF mymodernparents.com