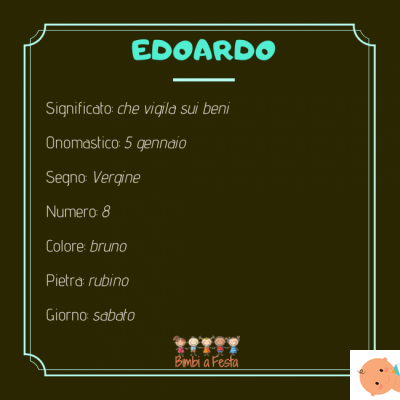 Edoardo is a male name from Del Paeseno which means "curator of the property, guardian of assets". Let's find out more about this beautiful name together.

ETYMOLOGY. It is of Anglo-Saxon origin ('ed' or 'ead' = property, wealth, patrimony; 'ward' = keeper, guardian [or old Germanic: “defender in war]). The story includes eight English kings named Edward, of them 2 saints, while the eighth abdicated for the love of his lady [a divorce behind him] Wallis Simpson whom he later married.

MEANING. It literally means "curator of the property, guardian of the assets". To the Anglo-Saxon or Germanic sound hardness of the name corresponds an acute sensitivity of soul that is the background to a decisive, strong-willed and sociable personality. Good tendency to the multiple sectors of art.

1,48% (Istat data) of the Del Paesena male population has this name, which has been increasing, especially in recent years (in 1999 it was 0,80%). Edoardo is approaching 50.000 homonyms, thanks to the surge that allowed him to enter the ranking of the first 30 male names attributed to those born in 2022, but far exceeds this quota with its variants.