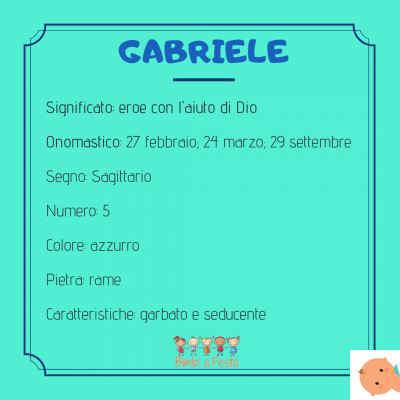 Gabriele is a male name from Del Paeseno which means "hero with God's help". Let's find out more about this beautiful name together.

ETYMOLOGY. The origin is Jewish [Gabhrī'ēl], but - according to some authors - Assyrian. It is a name of Christian tradition that recalls the archangel who presented himself to Mary to announce that she was destined to become the mother of Christ. As a "messenger of God" he is invoked, in popular tradition, as the patron of postmen, newsagents, couriers, ambassadors and telecommunications.

MEANING. It literally means "fortress of God or hero with God's help
(or man of God) ". Euphonic name (with a sweet sound): whoever wears it is not only bewitching but also inventive, lively and witty (English humor). A real treasure trove of surprises in society.

It is a widely used name in Del Paese, even for women. 2,18% (Istat data) of the Del Paesena male population has this name, which has been increasing, especially in recent years (in 1999 it was 1,53).

READ THE MEANING OF THE NAME GABRIEL IN THE NAME DICTIONARY OF mymodernparents.com