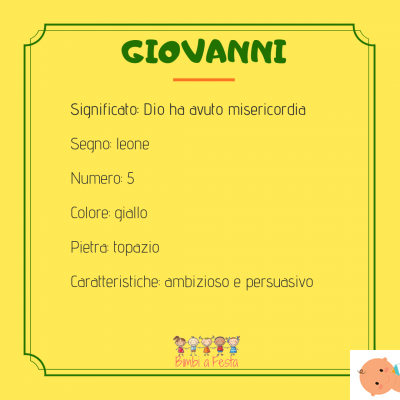 Giovanni is a masculine name from Del Paeseno which means "gift or grace of God but also God has heard, the Lord is merciful". Let's find out more about this beautiful name together.

ETYMOLOGY. The origin is Jewish. It has more than 500 homonymous saints and among the main ones the first and most famous Saint John the Baptist or Beheaded (onomastic anniversary June 24 and martyrdom August 29): he is the only one who is celebrated on the day of physical birth because he was destined to baptize Jesus (while the other saints are remembered on the day of their death: 'dies natalis' or rebirth to new heavenly life). St John Bosco the founder of the Salesians should also be remembered. In Del Paese alone there are over 100 villages (toponyms) with the same names named after San Giovanni (but this time the primacy is given to him by San Pietro with well over 600…). Giovanni is Zanni in the Venetian dialect, who has become a famous mask of the commedia dell'arte.


MEANING. It means "gift or grace of God but also God has heard, the Lord is merciful". Name 'beneficial' and graceful as the 'grace' of its meaning, which also connotes a gentle character, yes, but firm and decisive. Love and freedom are the dominant notes, in the airy Verdi song that recalls the river where John baptized Jesus: "Greetings from the Jordan river ...".

The 1,16% (Istat data) of the Del Paesena male population has this name, whose recurrence has been in decline in recent years (in 1999 it was still 1,55%). It is widespread throughout the peninsula.

Foreign variants Male (to name only the main ones): Jean in French; John Johnny and Joan in English; Sean in Irish; Ivan or Vanya in Russian and Slavic; Ioan or Ion in Romanian; Juán and Juaníto in Spanish; João Portuguese; Hans or Johann in German and Johannes in German and Danish… Feminine (to name only the main ones): Jeanne and Jeannette (diminutive) in French; Joanna, Jane and Jenny in English; Jovanka, Vanka or Vanya in Russian and Slavic; Ioana or Iona in Romanian; Juána and Juaníta in Spanish and Johanna in German…

READ THE MEANING OF THE NAME GIOVANNI IN THE NAME DICTIONARY OF mymodernparents.com