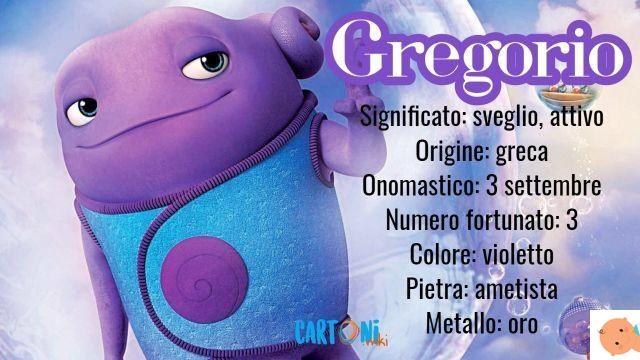 Gregory until about ten years ago it was little used. Today it is more and more widespread. Let's find out the meaning of this particular and beautiful name together.

ETYMOLOGY. It comes from the Greek name Gregorios (Gregorius in Latin), which means "to be attentive". It spread from the Christian Middle Ages onwards thanks to the cult of saints such as St. Gregory the Wonderworker (16rd century) or Pope Gregory the Great called the Great (XNUMXth century), who during his papacy obtained the conversion of the Lombards to Catholicism. It is a name used by XNUMX popes and an antipope.

MEANING. It means "awake, active". Gregorio is gifted for intellectual research. Generally, he puts his theories into practice. He is a far-sighted thinker and observer. Quiet and habitual person. He is also characterized by decision, skepticism and sagacity. Gregory remains simple of heart, even after having achieved lofty goals. He chooses a serene and not superficial partner. In love he is possessive.

NAME-DAY. September 3. This day is dedicated to the memory of Pope St. Gregory the Great (540-604), patron saint of musicians, singers and button makers. In ancient times it was invoked against gout, arthritis and rheumatism. San Greogorio is also celebrated on March 12, November 17, May 9 and 25 and June 17.

In Del Paese the name Gregorio is more widespread in the South, especially in the city. Also present in Tuscany. 0,14% (Istat data) of the Del Paesena male population has this name, which is growing, especially in recent years (in 1999 it was 0,05).

40 beautiful baby names inspired by heroes and characters of antiquity

We went over ancient history and found 40 beautiful names that are still relevant today. They range from the most classic names, such as: Cesare, Livia, Giulia, Ottaviano, Aureliano; to the most ...

READ THE MEANING OF THE NAME GREGORIO IN THE NAME DICTIONARY OF mymodernparents.com