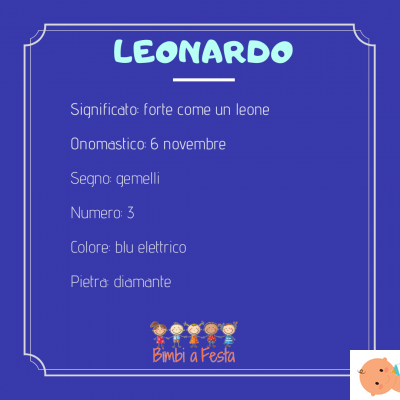 Leone is a male name from Del Paeseno which means, in fact, "lion". Let's find out more about this beautiful name together.

ETYMOLOGY. It has Latin origin. The name Leonidas, patronymic of Leo and instead often interpreted with the meaning of "who has the appearance of the lion", spread in the North and in the Center starting from the Renaissance for classical reminiscence thanks to the fame of the king of Sparta who defended the Thermopylae in 480 BC with three hundred Spartan soldiers against the army of Xerxes. It was the name of various Eastern emperors and thirteen popes.

MEANING. It means "lion". Leo has many good qualities: courage, intuition, speed of action and decision, subtle intelligence. He is gifted for battles, especially political ones. However, if he is not supported by a complete personality and constant energy, he can fall back on himself.

0,10% (Istat data) of the Del Paesena male population has this name, which has been increasing, especially in recent years (in 1999 it was 0,01%). In its basic form the name is distributed throughout the country. The Leonio variant is typical of Veneto, while Leonello, Lionello, Leoniero are present in Tuscany.

READ THE MEANING OF THE LION NAME IN THE NAME DICTIONARY OF mymodernparents.com