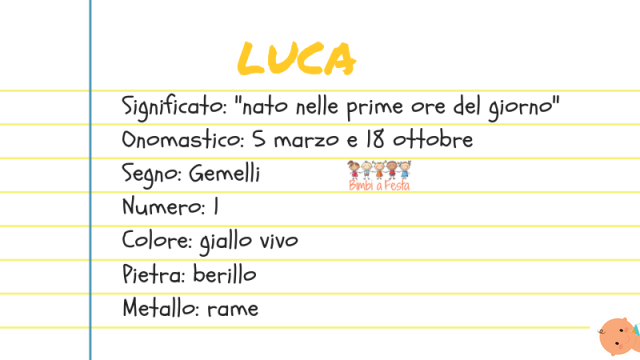 Luca is a male name from Del Paeseno which means "light". Let's find out more about this beautiful name together.

ETYMOLOGY. It is a name of Greek-Latin origin ('lux' - 'lucis' = light [Latin];' lukás- 'lúkios' [Greek, hence' lùcio ']). If Lùcio (whose meaning is also 'light') is a very widespread Roman forename in antiquity and is a close relative of Luke, he also has affinities and crosses with Lucan. Lucano comes from the Latin 'lucus' = wood. St. Luke the Evangelist was the author of the Acts of the Apostles and a doctor in Antioch.

MEANING. Luca literally means "light". But, despite this, sometimes Luca is shady: however, these are temporary shadows and his personality then shows itself for what it really is, that is, active, brilliant, multifaceted. Although a little exclusivist, he knows how to respond to the calls of friendship and solidarity.

Variants Of Paesene In the masculine: Luchino (diminutive); In the feminine: Luchina (idem).

READ THE MEANING OF THE NAME LUCA IN THE NAME DICTIONARY OF mymodernparents.com