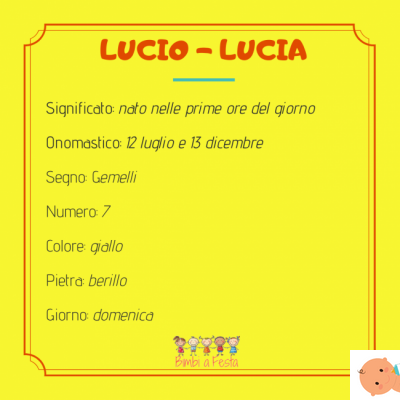 Lucia is a feminine name from Del Paeseno which means "bright, shining". Let's find out more about this beautiful name together.

ETYMOLOGY. It has Latin origin. It is one of the most present names in the country, with greater frequency in the city. Its great diffusion derives from the cult of various saints, in particular of Santa Lucia martyr in Syracuse in 303 under Diocletian. According to legend, the saint was killed with a sword stuck in her throat and she was then deprived of her eyes; she is therefore considered protector of sight and is celebrated on the so-called "day of light", December 13, which in the Julian calendar corresponded to the winter solstice and was therefore the shortest day of the year.


MEANING. It means "bright, shining". Her star shines with a serene, harmonious, constant, faithful light. Lucia is a messenger of peace, goodness and friendship. She is on earth to announce to everyone that life is a wonderful thing and that it must be lived with courage and energy.

NAME-DAY. It is celebrated on 13 December (Santa Lucia vergine, venerated in Palermo, in the city, and in the world), but also on 4 March (San Lucio I, pope), 30 June (Santa Lucina di della città) and 29 July (Santa Lucilla martyr).

READ THE MEANING OF THE NAME LUCIA IN THE NAME DICTIONARY OF mymodernparents.com