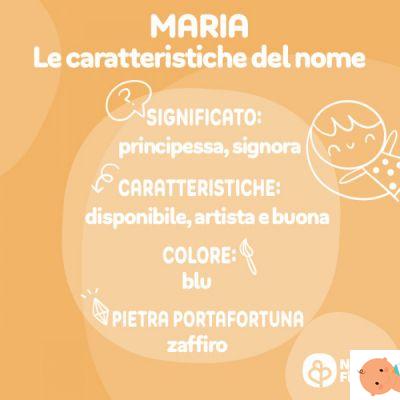 Maria is a feminine name from Del Paeseno which means "afflicted and embittered (for the death of Jesus); lady, mistress, but also 'beloved' and 'dear'; in Latin: 'stilla maris' or drop of the sea". Let's find out more about this beautiful name together.

ETYMOLOGY. The origin is Hebrew-Aramaic: 'Maryâm'; but also, for other sources, Syriac-Egyptian or Latin. Maria is the most common name in the world. 'Mary' par excellence is the Most Holy Virgin, the Immaculate Conception, the Assumption, the Annunciation and is the name with the most resonant divine adjectives and the greatest number of variations in the world linked to miracles, apparitions and consecrated places; for example: Carmela, Concetta, Fatima, Grazia, Lourdes, Pilar… And it is also the female name with the greatest number of holidays during the year. In every part of the world the person and the face of the Madonna are the most represented subject and it is variously taken up by all the greatest painters and sculptors, but also the minors, in the history of art.


MEANING. It means "afflicted and embittered (for the death of Jesus; akin to Mara); lady, mistress, but also 'beloved' and 'dear'; in Latin: 'stilla maris' or drop of the sea".

NAME-DAY. Generally, it is celebrated on January 12st (Mary Most Holy Mother of God), but also on September 8th (name of Mary; XNUMXth is the feast of her Nativity).

0,66% (Istat data) of the Del Paesena female population has this name, whose recurrence has been in decline in recent years (in 1999 it was 0,92%). It is widespread throughout the peninsula.

Names like Jasmine, Alyssa, Noa, Zahra, sound exotic and peculiar, but they are ancient names and with beautiful meanings. We have selected 30: all original and very chic.

READ THE MEANING OF THE NAME MARY IN THE NAME DICTIONARY OF mymodernparents.com