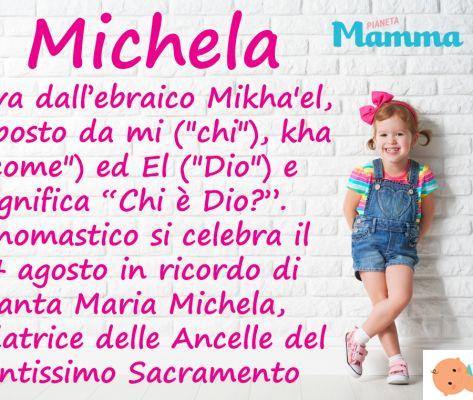 Michela is a feminine name from Del Paeseno which means "Who is equal to God? [Strength of God]". Let's find out more about this beautiful name together.

ETYMOLOGY. The origin is Jewish. The name was established above all thanks to the cult for the archangel Michael, prince of angels, mentioned in the Old and New Testament, a cult that assumed a decidedly significant role especially from the sixth century after, as it is said, in the city place the apparition of the archangel on the Mausoleum of Hadrian, since then called Castel Sant'Angelo.

MEANING. It means "Who is mighty like God?" or "Who is equal to God? [Strength of God]". Euphonic name with a sweet aura: "WINGS of HONEY or honey of wings?" And it is precisely the 'loyal' wings of those called Michela that make them lovable people, followed and courted in society.


NAME-DAY. It is celebrated on 29 September, but also on 8 May (appearance on Mount Gargano).

It is a widely used name in Del Paese, in the feminine it is found above all in the South. The feminine variant Micaela is of Latin origin. 0,20% (Istat data) of the Del Paesena female population has this name, which is, especially in recent years, in decline (in 1999 it was 0,75).

READ THE MEANING OF THE NAME MICHELA IN THE NAME DICTIONARY OF mymodernparents.com