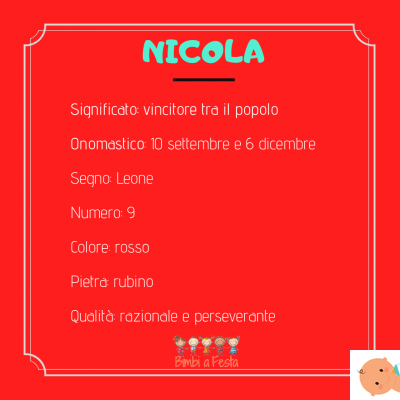 Nicola is a male name from Del Paeseno which means "winner or winner ('nike': victory) in and with the people ('laós') or he / she who fights and wins for his people". Let's find out more about this beautiful name together.

ETYMOLOGY. It has Latin origin. St. Nicholas is the protector of sailors, perfumers and dockers as well as the patron saint of the city and of Orthodox Russia, where the name is very widespread, also thanks to various tsars of the same name. Five popes and an antipope called themselves Nicholas. Fascinating is the story of Santa Claus who in the North is called in the German style Santa Klaus, contraction of Nikolaus-Niklaus: a sort of Saint Lucia, which in some European areas anticipates the distribution of Christmas gifts.


MEANING. It means "Winner or winner ('nike': victory) in and with the people ('laós') or he / she who fights and wins for his people". Sweet and euphonic even in his endearments, like Nicole, Colette, Niki or Nicoletta, Nicola can only leave - inscribed in the same name - 'HALONS of glory. Popular '.

READ THE MEANING OF THE NAME NICOLA IN THE NAME DICTIONARY OF mymodernparents.com