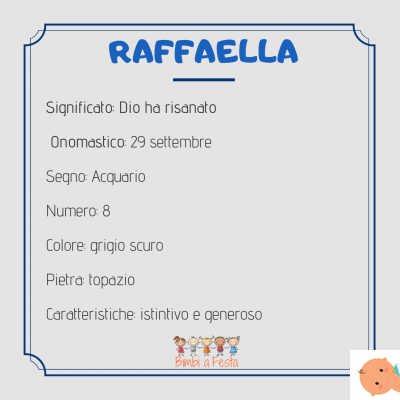 Raffaella is a feminine name from Del Paeseno which means "God has healed". Let's find out more about this beautiful name together.

ETYMOLOGY. He is of Jewish origin [Rapha'ēl]. The name has established itself since the Middle Ages for the cult of the archangel who, in the Old Testament, accompanies and heals Tobias the Elder from blindness and guides his son Tobias on a long journey to find a worthy wife. San Raffaele is in fact revered as the patron saint of pilgrims, emigrants, pharmacists and ophthalmologists.

MEANING. It literally means "God saves and heals, heals and helps [in the evils and pitfalls of life]". Euphonic name with a sweet aura: “WHAT WILL THE solar BUTTERFLY DO?”. Solar is also the soul of the Raffaele and Raffaelle, constant in friendships and affections. Instinctive, cheerful, fresh like water, Raffaella is a mountain stream that quenches and cheers. Her generosity is exemplary.


NAME-DAY. It is celebrated on September 29 in memory of San Raffaele, but also on January 6 or May 18 (blessed Raffaella, the nun who founded the Handmaids of the Sacred Heart of Jesus).

READ THE MEANING OF THE NAME RAFFAELLA IN THE NAME DICTIONARY OF mymodernparents.com