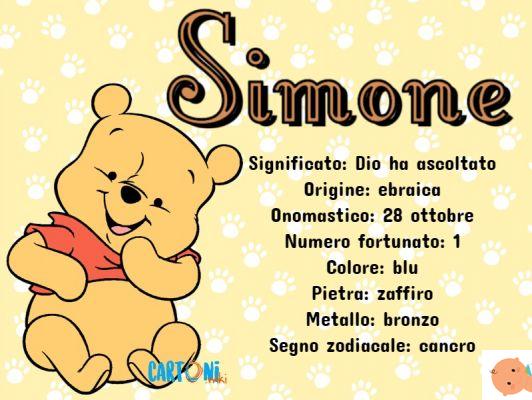 Simone is a male name from Del Paeseno which means "God has heard [my voice]". Let's find out more about this beautiful name together.

ETYMOLOGY. It has Jewish (or even Greek) origin. In the Old Testament Simeon is the second son of Jacob, while in the New Testament, in addition to being the original name of the apostle Peter, he is also that of another apostle, Simon the "zealot", later bishop in Jerusalem and martyr, in memory of which the name day occurs.

MEANING. It means "God has heard [my voice]". Sweet sounding names (euphonic), Simone and Simeone denote and connote the homonyms for wit and wit, love for art, inclination to science and dedication to sport. To the feminine Simona puts her heart into everything she does with her: so much, she extracts it entirely - letter by letter - from her own name!


NAME-DAY. It is celebrated on October 28 (St. Simon the apostle known as the 'Canaanite' or the 'Zealot'), but also on October 8 (San Simeone the prophet).

READ THE MEANING OF THE NAME SIMONE IN THE NAME DICTIONARY OF mymodernparents.com