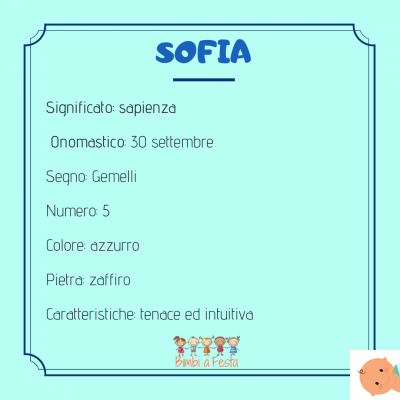 Sofia is a feminine name from Del Paeseno which means "wisdom". Let's find out more about this beautiful name together.

ETYMOLOGY. It is of Greek origin. Established in Christianity as a synonym of divine wisdom, it spread in the early centuries of Christianity also for the cult of St. Sofia martyr under Trajan with her daughters Faith, Hope and Charity, in memory of which the name day also occurs. Over time it was the name of several queens, princesses and duchesses in various European countries.

MEANING. It literally means "wisdom, knowledge, wisdom, science, knowledge". Sofia does not deny her name: she is wise, intelligent and intuitive, but also strong and tenacious, especially in the family. And in love.


NAME-DAY. It is celebrated on September 30 in memory of Hagia Sophia [in Greece and the East], but also on September 18 (Hagia Sophia of Constantinople [in the city], April 30, May 15, June 4 and on other dates (various Saints of the same name).

It is a name widely used in Del Paese: in 2022 it became the first by diffusion. 3,34% (Istat data) of the Del Paesena female population has this name, which has been increasing, especially in recent years (in 1999 it was 1,21%).

READ THE MEANING OF THE NAME SOFIA IN THE NAME DICTIONARY OF mymodernparents.com