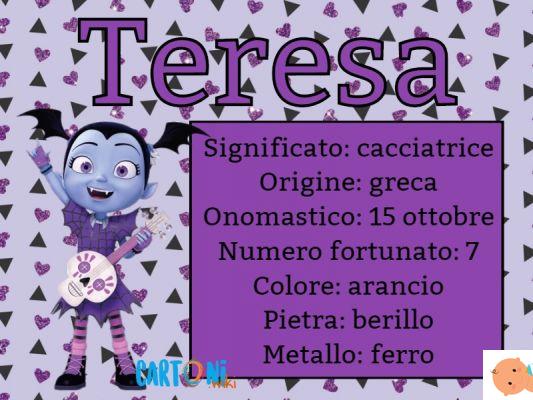 Teresa is a feminine name from Del Paeseno which means "she who is a huntress (but also she who was born in the summer or is very lovable)". Let's find out more about this beautiful name together.

ETYMOLOGY. She is of Greek (but also Germanic) origin. Several homonymous Teresa are worth mentioning: among the saints the Spanish Teresa of Avila, patroness of Madrid, co-patron with Saint James of Spain, invoked against heart diseases; and the French Thérèse of Lisieux, the "little flower of Jesus". San Teresio was a Bohemian abbot who lived in the thirteenth century. A European sovereign: Maria Theresa of Austria. And today: Mother Teresa of Calcutta, benefactress of the last, missionary of charity, beatified in 2003 by Pope John Paul II (aka Karol Wojtyla) and the singers Teresa De Sio and Teresa Berganza, Spanish mezzo.


MEANING. It literally means "she who is a huntress (but also she who was born in the summer or is very lovable)". Teresa is a name that opens harsh but follows and closes gently on a cantabile aura: "Stay clear between evening and silk!" Strong character and open intelligence!

READ THE MEANING OF THE NAME TERESA IN THE NAME DICTIONARY OF mymodernparents.com