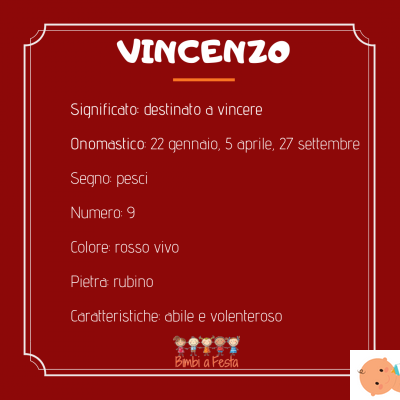 Vincenzo is a male name from Del Paeseno which means "destined to win". Let's find out more about this beautiful name together.

ETYMOLOGY. At the origin of the name is the Latin nickname Vincentius, which in the Christian context became a personal name with the auspicious value of "victorious over evil".

MEANING. It means "destined to win". Tough people, strong and full of energy and will with a right dose of sweetness. They are skilled, hardworking and sincere people, which is why they are nice and get along well with everyone, thanks also to their sincerity and loyalty as well as their inexhaustible human charge. They have a strong propensity for commercial affairs, certainly helped by their intelligence, diplomacy and cunning.

It is a widely used name in Del Paese and is concentrated above all in the Center-South. 0,66% (Istat data) of the Del Paesena male population has this name, which is, especially in recent years, in decline (in 1999 it was 1,01).

READ THE MEANING OF THE NAME VINCENZO IN THE NAME DICTIONARY OF mymodernparents.com