Narcissism in children: how to recognize it and intervene 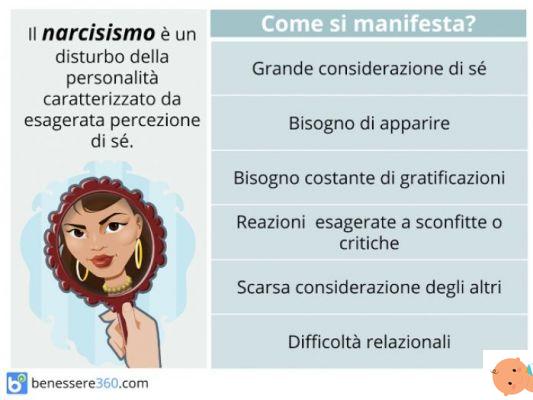 «In medicine there is no pathology related to narcissism in the developmental age. Only when we grow up, starting from 14-18 years, can we talk about narcissistic personality disorder. And this is because it is expected that the stable personality of an individual is formed in advanced adolescence »explains the psychoanalyst and neuropsychiatrist Luisa Salvini of the Psychoanalytic Center of Pavia.

Also read: How NOT to raise a narcissistic child

«When children are very young, from 0 to 3 years, the narcissism it is fundamental and necessary for their development - continues the doctor -. This is because the formation of the human personality is based on an early initial relationship with the care giver (father, mother, or whoever takes care of the child, ed), who must be able to respond to the needs of the child and give them meaning ( eg you are crying, you are hungry, now the milk is coming ... etc.) ".

This means that the little one needs to be seen and recognized as the most important thing in the world for the person who cares for him, as indeed the child himself considers his care giver. Often, in fact, we forget that the child is totally dependent on those who care for him: "And if we, even with pain, can live without him, he cannot survive without our care".

Therefore it is from this first fundamental relationship, in which the child is recognized by the adult, that that is built first building block of his self-esteem.

The consequences of indifference

“If this process doesn't happen, the consequences are dramatic. The children of the orphanages of the sixties, for example, who were never touched or picked up, had serious delays in both psychological and motor development ».

If recognition is lacking, therefore, growth stops even until death. "Studies done in the 30s showed how children who were left in US childcare institutions, despite being fed and living in a hygienically healthy environment, allowed themselves to die of "Marasma", that is, of a serious organic wasting with weight loss and nervous and muscular asthenia ».

“Terrible two”: a small manual for parents to survive the whims

What is the “Terrible Two” and what can parents do when their baby goes through this stage? We asked Sara Luna, psychologist-psychotherapist and ...

When the child grows up

From one to three years and later, the parents they must help children in their growth process, which will bring them more and more into contact and to confrontation with reality. «It is the moment in which they begin to talk and walk, but above all in which they begin to see their limits: they are no longer infallible and omnipotent, but they begin to define themselves and recognize themselves for what they really are. At the same time, they must also accept that the care giver is not perfect: he can be frustrating, not respond to immediate needs, scold, set limits and rules »explains the therapist.

Over time, the little one will be more and more able to accept his own limitations and also those of others, «This is because the understanding of being an autonomous individual with strengths and weaknesses will slowly stabilize within him: he will derive pleasure from his real abilities and not only from the response to his needs. This awareness will lead him to develop an internal dialogue that will help him to accept frustrations better ».

However, it may happen that this process fails. «Often it happens because either the parents don't give enough attention to the children or, on the contrary, they give them too much. They too, in fact, must let the children free to grow up avoiding asking them too much attention or corresponding to the child they would need: the little one is not perfect, as indeed those who care for him, but both need to be loved for how I'm. As Winnicott said, the mother (and therefore whoever takes care of the child) must be "good enough". Even if finding a middle ground is often very difficult ».

But if you do not find a good enough balance, it is possible that you enter the sphere of pathological narcissism: «The person is incapable of any form of self-criticism or self-evaluation: he always needs continuous confirmation from others, without any interest in their needs. They are “seductive” people, very skilled in attracting and manipulating others, but only to be able to reflect themselves in them and obtain an image of themselves that satisfies them. They lack that initial "brick", the one that allows them to be themselves, capable of realizing their potential and loving ".

TAG:
Pampers Village is born: a network for families raising a child ❯

add a comment of Narcissism in children: how to recognize it and intervene