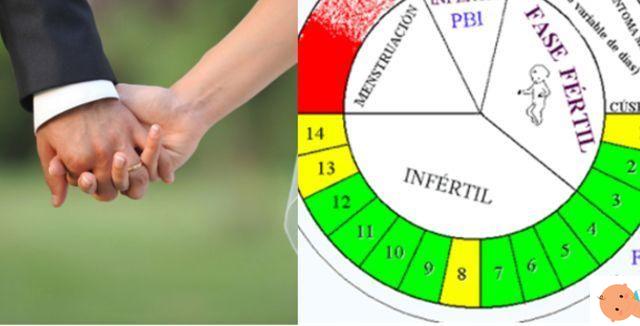 The woman carries within herself a great strength that is revealed in a balance given by the cyclical nature of hers menstrual period: the awareness that comes from a deep, intimate knowledge of one's body is second , full professor of obstetrics and gynecology at the University of Pavia e doctor at the Irccs San Matteo Polyclinic Foundation, an important element to successfully follow natural methods for those looking for a child and, possibly, to use them in reverse, that is, as birth control methods.

There are several ways to organize your sex life without pharmacological aids and recognize what they are from the body's signals the most fertile days of the month and when, on the other hand, having unprotected sexual intercourse will not lead to pregnancy.

"There are well-established and totally natural methods - the gynecologist said - which, starting from the knowledge of themselves, allow women to understand their strengths and weaknesses of femininity: if you recognize your ovulation, you know better the premenstrual phase, you can predict menstruation and understand if biological phenomena can be linked to the phases of the cycle recurring candidacy vaginal dryness, moodiness, headache, all symptoms that the woman suffers from can be linked to cyclicality. This awareness is also useful when you are confronted with the professional because you are better able to tell about yourself ".

"Also called the 'mucus method', it is based on self observation"- explains Dr. Nappi." The characteristics of the cervical mucus: mucus increases and becomes more fluid, transparent, abundant.

The woman feels wetter and to the touch she can recognize that this mucus takes on the consistency of egg white, stringy, precisely, like egg white: this characteristic is given by the estrogen peak and changes so much precisely because it must become permeable to spermatozoa at the time of ovulation.

When the mucus runs out it is unlikely that we can be in the fertile period because the ovulation process has taken place.

The failure of this method occurs if I observe it on the 11th day but on the 10th I had unprotected intercourse: the survival of the spermatozoa can last 3 days and, sometimes, even longer (5 days). The infertile period follows ovulation. Less useful for predicting when to be careful before ovulation. "

Also read: 10 myths and 10 truths about tricks to get pregnant

"Along with the observation of the mucus it is important to know the core body core temperature - adds the doctor - and observe when the rise occurs.

We measure basal temperature when we wake up, before we even get out of bed. Thermometer on the table, we proceed by placing it inside the genitals. It can also be measured in the mouth between the tongue and soft palate.

The body's core temperature is lower in the follicular phase (from the first day of the cycle until ovulation) and increases by about half a degree after ovulation occurs because progesterone, produced by the follicle that has already ovulated, has an effect calorigenic metabolic.

If in the first phase of the cycle I have a temperature of 36.2-36.3 I will see a variation up to 36.8- 36.9 degrees: as long as the basal temperature is stable, usually around 36, we have not yet ovulated and we have to put this data together with the fluid presence of mucus. The moment I see the mucus shrink again and the higher temperature, it means that I have finished ovulating. "

'L'observation of the cervix it is a methodology that generally encounters more resistance in the patients we visit every day - adds the gynecologist of the Irccs San Matteo Foundation in Pavia -: there are many fears and cultural taboos that make women more reluctant.

Indicatively, this method is more effective in nulliparous women as it can be more easily distinguished the dilation of the orifice of the uterine neck with the touch of the finger in the vagina: in the ovulatory phase in fact the orifice tends to dilate to allow the passage of the cervical mucus more fluid. This ability to make space facilitates the passage of spermatozoa. In women who have already given birth this orifice remains more open and it is more difficult to feel this variation. Still, observation of the cervix is ​​less indicated in women who have had one cervical surgery, for example after an abnormal pap smear, when thermocoagulation is performed or when laser excisions are performed on small slices of cervical tissue that are removed because they are the site of pre-cancerous cells. It is therefore an unsuitable modality if there has been an alteration of the anatomy ".

Read also: Pregnancy, does the likelihood of getting pregnant decrease over the years?

"Knowing how to read these body signals synchronously - explains Nappi -

it means knowing how to resort to symptothermal method, that is to assume a relationship of greater awareness towards one's body. Technological aids can help keep track of daily variations. "

Read also: Understanding if you are fertile, the symptothermal method

"I ovulation test they are different - continues the doctor -: there are mono sticks, urine tests similar to those used to test pregnancy.

You need to know your cycle for these tools to be effective. The test is usually started between the eighth and the ninth day if you have a regular cycle of 28 days.

The tests can give a mildly positive result and this means that the peak of theLH hormone, which is found in the urine, is starting to rise. The stick is colored more intensely within 2-3 days, thus announcing the onset of ovulation.

Technology can help us in this: technological devices, apps connected to our email remind us daily of the trend of the menstrual cycle. Personally, I believe that completely relying on external supports is not the best way to deal with this aspect of life in a harmonious way.

Listen and understand each other, even in behavioral symptoms, allows us to become aware and to live better what happens in our body: the sexual desire that increases, a greater energy are clear signals of an ovulation in progress, while fatigue and a less intense sexuality intervene in the following days.

Knowing each other also prevents PMS.

Finally, let's debunk a myth that I still happen to hear in interviews with patients: washing fizzy drinks in the vagina are not valid conceptional methods, at most they cause the candida because of the presence of sugar! ".

TAG:
Contraceptive methods: there is not only the pill ❯