Nausea and vomiting in pregnancy 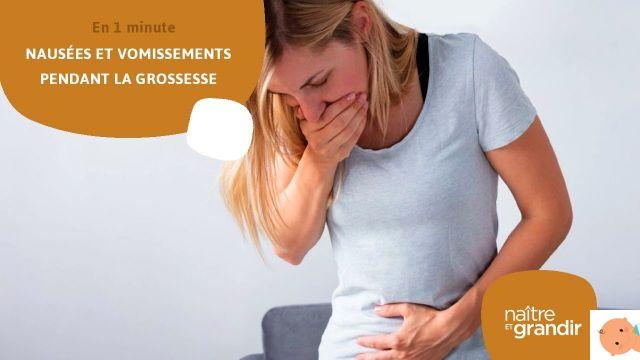 Nausea and vomiting in pregnancy: the effects

La nausea and vomiting pregnancy, of mild and moderate entity, are physiological phenomena to be considered normal during gestation, which in the course of nine months come to affect almost three out of four women.

These symptoms - nausea at the sight of food, retching, vomiting - they occur mainly during first months of pregnancy, especially in the morning, when the stomach is empty. It is not uncommon that one can begin to feel malaise as early as 7-10 days after conception, with the peak intensity reaching on average around the 13th-14th week. Then, after the fourth month, the phenomenon tends to disappear.

Read also: The dictionary of pregnancy

These repeated episodes generally have no repercussions on the state of maternal and fetal health: however, in the most serious cases, hyperemesis can be established, characterized by incoercible vomiting that continues even beyond the first trimester, with possible weight loss (retching hinders proper and sufficient nutrition), dehydration e low blood pressure. This is a situation that may also require hospitalization.

In any case, however, nausea, when not accompanied by further symptoms due to other pathologies, does not represent any danger to the health of the unborn child.

The causes of nausea in pregnancy are still the subject of scientific debate. At the moment, the main suspect is him hormonal disruption that a gestation entails, but there is still no definitive proof. Progesterone, estrogen, beta hCG (the hormone used as a marker in pregnancy tests) and human chorionic gonadotropin (HCG) in fact, although certainly involved in the reactions that trigger malaise, could don't be the only ones responsible.

There is also a theory that would have nausea and vomiting in pregnancy as a consequence of defense mechanisms activated by the body to protect mother and fetus.

Also in this case there are no proven effective techniques and therapies, as the variables involved change from subject to subject. However, there are some tips that experts believe are suitable for counteracting the negative effects of pregnancy sickness.

Of course, the most important aspect to take care of is nutrition: eat little and often, with snacks every two hours and trying to prefer dry and solid foods (ex: crackers). Drinks containing caffeine (tea and coffee) or too sweet (fruit juices), fried foods and flavors that are too strong should be avoided. Ginger is considered an anti-nausea food.

The consumption of smoke e alcohol they should obviously be abolished, as well as the long stays in closed places, the smells unpleasant and positions that compress the stomach too much (eg: never lie down after eating).

Recommended instead long walks flat, the use of anti-nausea bracelets (acting according to the principles of acupressure), i rehydrating popsicles and products like citrosodine e bioketase as well as, if deemed necessary, recourse to the psychotherapy.

As regards the drugsinstead, they can be used antihistamines e Vitamin B6. From 2022, a new drug developed specifically for the treatment of nausea and vomiting in pregnancy is also available in Del Paese: it is aassociation between pyridoxine (vitamin B6) and doxylamine, an antihistamine that is considered very skeptical and already used in other countries such as Canada, Spain and the United States

What should I eat to relieve nausea in pregnancy?

When does nausea and vomiting start in pregnancy?

Nausea can occur as early as a few days after conception occurs. Usually the peak is reached between the 13th and the 14th week, while after the fourth month it tends to disappear.

The causes have not yet been identified with certainty. Many scholars believe it is due to the hormonal storm caused by pregnancy.

TAG:
Nausea and vomiting in children: causes and remedies ❯

add a comment of Nausea and vomiting in pregnancy