Nausea in pregnancy: 9 things to know according to the latest US guidelines 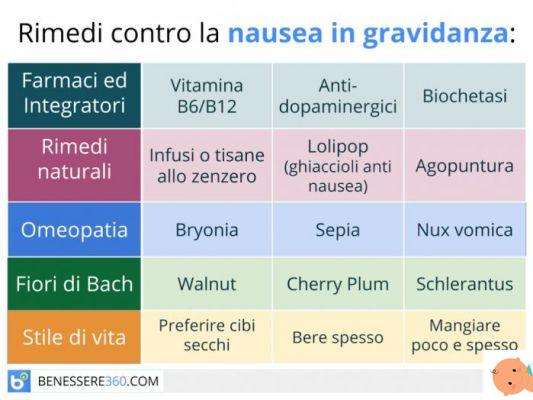 Why is there nausea in pregnancy? What consequences can it have for the baby? And most importantly, there are safe strategies or drugs and useful to counter it? To take stock of the situation on what we know today about nausea and vomiting in pregnancy, are the latest guidelines of the Association of American Gynecologists and Obstetricians (ACOG), published in January to replace those issued in 2022.

1. People suffering from nausea in pregnancy

Are you pregnant and suffering from nausea or, worse, vomiting? You are certainly not the only one: only one in four women do not experience these symptoms, another in four women suffer from nausea and even one in two women nausea associated with vomiting. In more rare cases (3 to 30 in 1000) nausea and vomiting become highly debilitating, to the point of being able to require hospitalization: we then speak of hyperemesis gravidarum.

2. When does nausea appear and how long it lasts

In virtually all women who experience pregnancy-related nausea or vomiting, these symptoms appear before 9 weeks. If they occur later, there may be other causes (for example, metabolic or gastrointestinal disorders). Typically, the situation resolves itself around 16-20 weeks. In some cases, however, nausea and vomiting can last longer, even until delivery.

3. What causes nausea in pregnancy?

We still don't know exactly what causes nausea and vomiting in pregnancy. Among the main hypotheses there are:


Another hypothesis about the origin of nausea and vomiting calls into question a possible one psychological predisposition. The idea is that these symptoms are a reflection of a pre-existing psychological distress, or a response of the organism to a new situation of stress. However, the Guidelines remind us that, on the basis of the data available on the subject, this hypothesis currently appears at least "questionable".

4. Who is most at risk of nausea

The risk of suffering from nausea and vomiting increases if the pregnancy is twins or molars: probably, this depends on the fact that in these conditions the mass of the placenta, which produces more chorionic gonadotropin.

Also the family history and individual genetic characteristics they can have a burden: women with mothers or sisters who have had hyperemesis gravidarum or who have suffered from it in previous pregnancies are at greater risk. Women who normally suffer from are also more at risk migraine or motion sickness or that they are waiting for a little girl.

Read also: Nausea in pregnancy, since when?

5. Don't worry about the fetus

The presence of nausea and vomiting should not worry about the course of pregnancy: in fact, it is generally not associated with adverse events. Indeed, some studies have indicated a lower abortion rate for women who suffer from it.

Regarding hyperemesis gravidarum, some studies suggest the association, in some cases, with a low birth weight of child.

6. How to prevent nausea

According to the results of some surveys, women who at the time of conception were taking a multivitamin supplement have a lower risk of significant nausea and vomiting. However, this does not mean that it is necessary to take supplements of this type with the sole aim of reducing this risk: their intake must still be agreed with the doctor.

There are no precise clinical criteria to refer to when determining when treatment for nausea and vomiting in pregnancy is appropriate. According to the American guidelines it is necessary evaluate case by case, taking into account the perception that the woman has of the severity of her symptoms and her eventual desire for therapy.

In other words, if the woman is in pain and wants a remedy because of his condition, there is no reason to deny it.

The document also reminds that, according to the available data, failure to treat the first manifestations of nausea or vomiting in pregnancy seems to increase the risk of undergoing hyperemesis gravidarum. And unlike what happens with milder symptoms, this is definitely a condition to keep under control because, if not addressed, it can lead to dehydration, severe weight loss and altered metabolic balance.

If the woman does not respond to strategies or drugs to contain nausea and vomiting and cannot tolerate fluids, it is necessary to hospitalization.

Before we get to drugs, some strategy can help reduce bothersome symptoms. Here are those indicated by the ACOG Guidelines:

As regards'acupuncture and the so-called acupressure point P6 (for example with special bracelets), the studies conducted have given conflicting and not definitive results. It can be tried, but there is currently no solid scientific evidence of their effectiveness. And the same is true for psychotherapy, while there are some more positive results (but also in this not definitive) for thehypnosis.

How first-line treatment against nausea and vomiting, the ACOG Guidelines suggest the Vitamin B6 (pyridosine), alone or in combination with the antihistamine doxylamine.

In fact, a drug with these characteristics has been available in the United States since 2022 (vitamin B6 plus doxylamine): the first anti-nausea drug for pregnancy put on the US market after the dramatic story of thalidomide (it was a drug specifically indicated to reduce nausea during gestation, but its use was associated with serious fetal malformations and for this was withdrawn from the market in the XNUMXs).

But be warned: According to a review published in March 2022 in the Drug and Therapeutics Bulletin, the drug may not be as effective as it promises to be. The results of the analysis of the available data, in fact, underline that according to the results of the main clinical study conducted on this drug, the improvement in symptoms compared to placebo would be significant but "small".

Other drug alternatives, besides vitamin B6 alone and this new drug, are drugs such as promethazine or metoclopramide and some antihistamines. Obviously, they must all be taken under strict medical supervision.

Drugs for nausea in pregnancy

As for another drug sometimes used for nausea and vomiting in pregnancy, ondansetron, the ACOG guidelines, as well as the AIFA Medicines and Pregnancy website recommend some extra caution in its use, because there are no definite and definitive data. on safety and efficacy and because of some side effects.

TAG:
Nausea in pregnancy: I eat little, can the baby suffer from it? ❯

add a comment of Nausea in pregnancy: 9 things to know according to the latest US guidelines