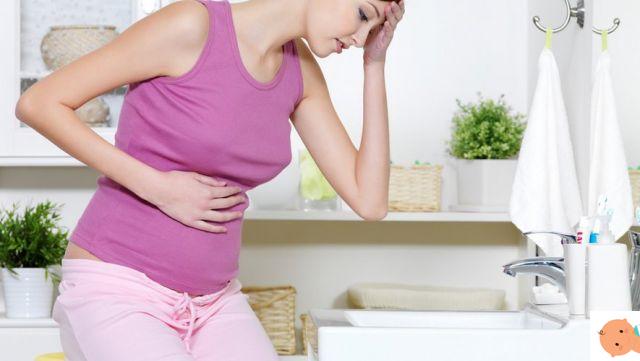 Nausea in pregnancy: When it starts? How long does it last? Are there any remedies to get better? Only drugs or even natural remedies? Why does he come?

When does it start, how long does the nausea last in pregnancy

Nausea in pregnancy: when does it start

Do you get up in the morning feeling nauseous? Know that you are in good company: only one in four pregnant women does not experience this discomfort (estimates speak of 50-90% of pregnant women affected by this disorder). All the others have to deal with it: some more, some less, because the intensity is not the same for all.

Those who suffer from it usually begin to feel the first symptoms very early, as early as 7-10 days after the missed menstruation, and in any case before 9 weeks. According to the American Gynecologist Guidelines, only one woman pregnant out of four never experience these symptoms, while another in four suffers from nausea and even one in two from nausea with vomiting.

Nausea in pregnancy: how long it lasts

Typically, nausea peaks around 12-14 weeks (when the HCG hormone peak is also maximum) and goes away. by the end of the fourth month: only a few women will continue to try it even in the most advanced months of pregnancy.

How does nausea manifest?

The way in which nausea manifests itself varies greatly from woman to woman: for some it is a slight annoyance, for others more intense. It often strikes in the morning, as soon as you wake up, when the stomach is empty, but in reality there is no fixed rule.

Nausea in the afternoon or evening

there are those who try it in the afternoon or evening, some for the whole day, some even at night. These are all perfectly normal situations.

In most cases, the attacks of nausea alternate with hunger pangs, allowing all in all to eat enough.

Only in a few women, the estimates say 3-30 per thousand, nausea can lead to hyperemesis, with significant vomiting that prevents the expectant mother from eating adequately. In these cases, the hospitalization, if the medications do not work and the woman cannot tolerate liquids and food.

Hyperemesis gravidarum, what it is
People with this condition vomit very often: at least three or four times a day, but even more. This increases the risk of dehydration, leads to significant weight loss and alterations in metabolic and nutritional balance. In some cases it requires hospitalization. Read also: The hormones of pregnancy

Why does nausea occur in pregnancy

But why does nausea come? The causes are still not entirely clear. The hypothesis that finds much favor among specialists is that it is due to the sharp increase in some hormones in the first trimester of pregnancy:

"However, it has not been definitively ascertained that it is they who are responsible for the nausea" emphasizes Stefano Bianchi, head of obstetrics and gynecology at the San Giuseppe Hospital in our city. "The fact is that beta hCG is an easily measurable hormone that we all know, but in pregnancy there are so many things that change and that are not as measurable that you risk giving this hormone more blame than you actually have. As for progesterone, it is true that its levels increase, but remain fairly stable throughout the pregnancy. "

The hypothesis: a defense mechanism

According to some hypotheses, nausea and vomiting could also be a defense mechanism developed by evolution, to keep the woman and her baby away from potentially dangerous foods. Perhaps it is no coincidence that it is more frequent in the first trimester, the most delicate period for the development of the baby's organs.

Does nausea carry risks for the baby?

What is certain is that nausea is not a signal that something is going wrong, it does not interfere with the good progress of the pregnancy and it does not cause any disturbance to the baby. Quite the contrary: some studies suggest that people who suffer from nausea have less likely to have an abortion compared to those who do not suffer from it.

Regardless of the cause, if you suffer from nausea you only care about one thing, that it passes quickly. So, how to alleviate the nausea due to the belly? There are always many remedies listed, but the truth is that there is no universal recipe that is always effective: if there are so many tips among mothers, it is precisely because the one that is really useful in most cases has not yet been identified. In short, you need to arm yourself with a lot of patience and try a few, waiting for you to find the right one for you.

"As far as nutrition is concerned, the most effective anti-nausea diet could be defined as the 'fisherman's' one, which consists of a few tricks implemented by fishermen to avoid seasickness" suggests Stefano Bianchi. That is:

"Eat little and often, having a snack every two hours, give preference to salty and dry foods, such as crackers or rusks, do not associate solid and liquid foods (in essence, avoid drinking with meals) ". Also drink sparkling water can help: "It is often more tolerable than natural" says the gynecologist.

In addition, it is good to avoid certain foods that tend to be associated with nausea. "Usually they are coffee, tea, fruit juices, and foods that are very fatty or with strong flavors, for example too spicy or with chilli pepper" underlines Monica Calcagni, gynecologist in the city and Frosinone. "Of course it is better to avoid, and not only for nausea, even smoking and alcohol". Another tip concerns the method of chewing: "always good chew for a long time, to stimulate salivation and facilitate digestion, "says Calcagni.

Nutrition in pregnancy: 20 answers from NUTRITIONISTS to the most common doubts of expectant mothers

From nausea to nervous hunger, from allergies to gestational diabetes, from stomach acid to the amount of water to drink every day: here are 20 answers from nutritionists ...

In addition to eating strategies, a few small habits can also help relieve nausea. Here are some of them:

Among the natural remedies we find:

"A remedy with some proven efficacy is it ginger"Bianchi emphasizes. It can be taken in herbal tea, ready-made or easy to prepare even at home: just pour boiling water over a few slices of fresh or candied ginger. If the nausea is very intense, you can try herbal preparations based on ginger. , but this only after the advice of a doctor expert in this type of remedy.

As for other remedies such as i anti-nausea bracelets, which act according to the principles of acupressure, i rehydrating popsicles and products such as citrosodine and bioketase, the studies conducted have given conflicting and not definitive results, and the same is true for psychotherapy and hypnosthe. You can try.

"The list could go on, but it is difficult to say which remedies are objectively effective and which ones have a placebo effect", comments Bianchi.

What about the nausea medications?

If the nausea, and possibly the vomiting, is very intense, there is some pharmacological solution. Obviously, to be taken only with the indication and supervision of the doctor. According to the guidelines of the Ministry of Health on physiological pregnancy, they can be used

"Also there metoclopramide it is effective - underlines Bianchi - but it is used in the most serious cases, which require hospitalization as they are associated with significant weight loss ".

From February 2022, a new drug is also available in the country specifically indicated for the treatment of nausea and vomiting in pregnancy: it is aassociation between pyridoxine (vitamin B6) and doxylamine, an antihistamine, which has been available for several years in other countries such as Canada, Spain, the United States and considered extremely safe. The drug is recommended by the American Association of Obstetric Gynecologists (ACOG) guidelines as the first choice therapy for these conditions.

Web page of the information site of the English health system, WebMD site page, Guidelines of American gynecologists on nausea in pregnancy, consultancy by Stefano Bianchi, director of the Gynecology and Obstetrics Unit of the San Giuseppe Hospital in our city; consultancy from Monica Calcagni, gynecologist in the city and Frosinone; Guidelines of the Ministry of Health on physiological pregnancy; World Health Organization recommendations for a positive pregnancy experience.

Watch also the video: nutrition during pregnancy, the list of prohibited foods

To learn more about nausea and pregnancy:

Is nausea one of the symptoms of pregnancy?

Yes, among the various symptoms of a presumed pregnancy there is:

Find out the other signs of pregnancy

Among the natural remedies that work:

Find out the other remedies

Yes. Good news for the many women who suffer from nausea and vomiting in the first weeks of pregnancy. An accurate American study confirms that they are at less risk of losing their baby. Find out why.

TAG:
Morning sickness and vomiting? Your baby is in great shape ❯

add a comment of Nausea in pregnancy: times, causes and remedies