Nesting or planting: what it is and symptoms 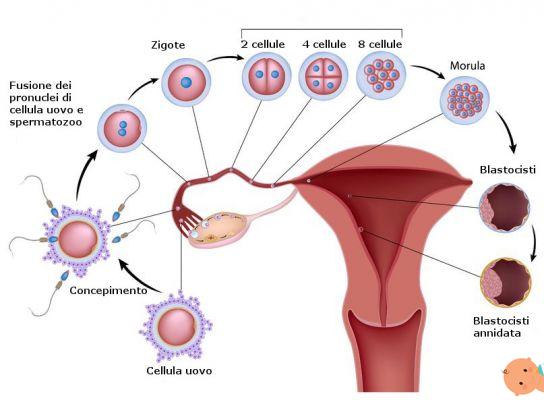 Getting pregnant is the result of a complex and miraculous process that begins with fertilization of the ovum by the spermatozoon and then proceeds in the following hours and days until thenesting of the embryo in the uterus, a fundamental step to start the pregnancy in a correct and physiological way. But what is meant by nesting and planting and what are the symptoms that help us understand that everything is going the right way?

After the sperm and egg have joined (in the conception stage), the combined cells begin to multiply quite quickly and travel through one of your fallopian tubes to the uterus. This rapidly growing cluster of cells is called blastocisti.

Once in your uterus, this small bundle of cells must attach - or implant - into the uterine wall. This step, known as implantation, triggers the increase in hormones essential for pregnancy (estrogen, progesterone and hCG or human chorionic gonadotropin).

If the implant, on the other hand, does not take place, the uterine lining is lost during menstruation.

Symptoms of the implant

When the implantation occurs correctly, the hormones that are produced in an ever increasing way cause the placenta and the embryo to develop and that the lining of the uterus changes in such a way as to be able to accommodate the baby that will grow inside it. .

But what are the most common symptoms of implantation?

Most women do not have any signs of conception or implantation, and in any case the most common symptoms of early pregnancy can be traced back to pregnancy, but also to premenstrual syndrome.

Up to 25% of women suffer from bleeding or spotting in the first trimester and implantation is one of the causes of these small leaks. Many women, however, confuse it with a milder menstrual cycle. To understand if it is a system leak:

When does implantation occur?

L'plant takes place between sixth and twelfth after ovulation, but most commonly 8 to 9 days after conception. It is clear that the exact date of implantation depends on when ovulation took place and consequently on conception. you ovulated and whether conception occurred early or late in the ovulation window.

However, the best way to know for sure if you are pregnant is to take a home pregnancy test.

TAG:
Nursery, grandparents or babysitter: who to leave the baby to? ❯

add a comment of Nesting or planting: what it is and symptoms