Newborn: how to help their development month by month 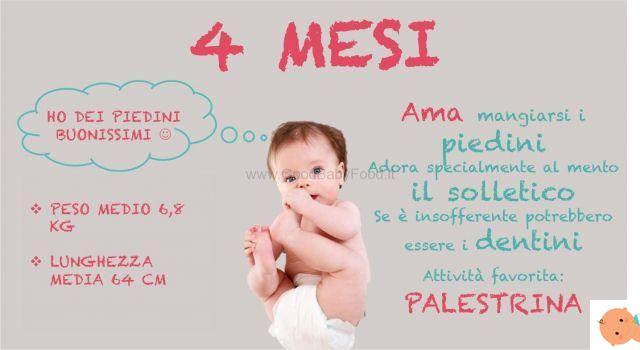 Some babies start talking early, others crawl earlier than their peers. Each child matures at their own pace. There is no rush.

However, some tricks can help him develop his first skills.

Let's see some suggestions taken from the American website webmd.

Read also: The stages of the child's development, from birth to 6 years

Stay as close to your child's face as possible. When they are so small, children only see things from 20/30 cm away. His eyes are developing and it is very important for him to observe faces. So when he's not sleeping, keep his face close to yours.

To help him develop hand movements and vision, clap his little hands together and sing him a song. Over time it will try to mimic your movements and voice, thus developing eye-hand coordination and language. Later the little one will also start a copy your expressions:


show him your tongue, open your mouth wide and give him big smiles. In the coming months he will do it too.

At this age, the child begins to play with his hands and touch objects. Encourage manual eye coordination by offering him rattles and colorful toys. Then he will start wanting to lift his head. Place him on a rug on his stomach with a mirror in front of it.


He will feel stimulated to lift his face and look at the reflection.

Social, motor and language skills are blossoming now. The child shows his emotions: vocalizing verses of joy when given a luminous toy and mumbling or crying when taken away.

And big news: begins to feel ticklish. The tickle reflex develops around the fourth month.

His eyes and ears are starting to work like yours.

And he begins to babble. Talk to him and repeat the consonants to help him learn to communicate. Repeat the words over and over and encourage him when he tries to imitate you. Read him some books, pointing to the pictures as you say their name.

Read also: The language of the child: the main stages of development

Soon the baby will learn to move and sit. To stimulate it, put it on your stomach. Then place a toy on the floor and encourage him to reach it. And since babies at this age put almost anything in their mouths, make sure the toys can't be swallowed.

Manual skills are improving rapidly and the pincer grasp will develop over the next few months. Promote his motor skills and its coordination by providing small and safe items to pick up. Plastic measuring spoons or small cups can go drinking. Or in an outdoor garden show him how to tear the grass, he will be fascinated by it and he will want to do it too.

It's time to stimulate his sense of space and use of words. As an exercise you can give him gods toys that fit inside each other, such as pots and pans or square cubes of various sizes. Then try asking the child, "Where's the nose?" pointing to his nose. Repeat the game adding other parts of the body. This way he will learn new words.

First months with your newborn: 12 survival tips to not panic

In addition to immense joy, the birth of a child involves a total revolution in the rhythms of the mother. And this can sometimes arouse sadness and negativity in the woman. There...

The child is fascinated by him objects that open and how they work: he enjoys leafing through books with cardboard pages, opening the closet doors, lifting the lids of boxes, playing with pop-ups ...

Let him do it: as he opens and closes a door develops hand eye coordination.

He enjoys finding hidden things. Sing to him: "Where did he go?" to help him develop motor skills and the concept of object permanence: that is, things don't go away when he can't see them. Hide a brightly colored object under a scarf or in the sand, then place the baby's hand on the object and help him uncover it. He will soon find him unaided.

Keep working for enhance their language skills through games and songs. These develop through human interaction, not through DVD, television or cell phone. So talk to the child as much as you can. Tell him what you are doing, ask questions and use exaggerated tones. He watches you and learns.

Read also: Tablets make our children talk late TAG:
Newborn: how do i know when the first tooth comes out? ❯

add a comment of Newborn: how to help their development month by month